When local artists, woodworkers, photographers, performers and musicians gather this evening to celebrate the Annual Streetlight Gala in aid of the David Busby Street Centre, they’ll be supporting a tremendously worthwhile cause.

The Centre, currently located at Trinity Anglican Church on Collier Street, has 38,000 visits each year from people living on the margins of society, who attend the Centre to receive practical help as well as support and encouragement from each other and from hundreds of dedicated volunteers. That figure is the same as the population of Barrie was just 25 years ago.

The Centre has been in the news again recently following the official announcement by Chairperson Don MacNeil that a decision has been made by the Board to seek a new location in the downtown core, effective next summer.

And, because Barrie is expected to have a population of over 243,000 in another 25 years’ time, the need for the services that the David Busby Street Centre provides is growing dramatically year by year.

But many people in Barrie today will know little about the man who was honoured that his name became officially associated with the Centre in September of 1994, just two months before his untimely death in a plane crash in the Windward Islands in the Caribbean. So who was David Busby?

Rev. Canon Edward David Busby was a former rector of Trinity Anglican Church on Collier Street which has housed the Street Centre since its inception in March, 1993. Dave was interested in all kinds of people beyond his typical church-going congregation, and was dedicated throughout his entire life to helping the poor and dispossessed.

He married Norah McClure, whose own father was the first Lay Moderator of the United Church of Canada, in Toronto in 1951. Norah, who continues to live here in Barrie, and is now almost eighty, has worked as a Volunteer at the Centre almost every Tuesday morning for the past 13 years.

When Dave and Norah arrived in Barrie in the mid-1980s, Dave already had an impressive track record of putting his deep spiritual faith into action. As a young man he’d studied at Trinity College at the University of Toronto and received both his Masters degree and a Doctorate in Theology.

He’d then worked in various capacities within the Anglican Diocese of Toronto but had also been a Chaplain at the Mimico Reformatory and the Vanier prison for women in Brampton. He later became a co-founder and Director of Street Haven in downtown Toronto, which was an emergency shelter for men and women between the ages of 17 and 70.

Shortly after arriving in Barrie in 1986 to take up his appointment at Trinity, Dave was approached by a local nurse, Mandy Hillyard. Mandy was appalled by the growing numbers of people she saw sleeping rough on the streets of Barrie, often in severe weather.

She approached numerous local businesses and professional companies to see if there were any community interest in financially supporting some kind of meeting place for these people, where they could receive practical assistance and support and get access to the help and services they needed.

Mandy was thrilled that so many organizations were entirely supportive of her efforts, and the Centre opened its doors for the first time in March of 1993, in the basement of Trinity Anglican Church where it has been located ever since.

Dave was particularly fond of giving rides to hitch hikers and was also the founder of the Ville Riders, a motorcycle club in Mississauga. His pride and joy was his vintage British Matchless motorbike which he bought from a heroin addict in 1959.

He always wore his clerical collar with pride in order to be easily identified by anyone who might want to approach him. People knew him to be a leader and a man of action – he ran for office more than once as both a Provincial and a Federal NDP candidate – and were attracted by his gentle manner and the warmth of his welcome.

Today, the Street Centre’s mission continues to be the one Dave would have endorsed himself – to be a place where people are accepted and respected just as they are. “Dave firmly believed that the empowerment of people began with their ability to care for themselves,” says Norah Busby, his widow. “He believed that people can initiate positive changes in their lives when they are genuinely supported and respected.”

Dave Busby was himself a great advocate for appropriate and affordable housing, which he saw as a basic human requirement. Some weeks before his death, I had the privilege of asking him to describe his response on first meeting a person in distress.

“I try to assist them by being a comforting person, by relaxing with them and assuring them that they are okay,” he replied. “I try to help them to remember that they are valuable, that they have a right to be alive. And I tell them not to be upset at themselves for feeling deeply, because feeling deeply means they are fully and wholly alive.”

“I encourage them to believe they have some goodness and greatness in themselves, and to see that their job is to discover their own importance and to learn to enjoy and appreciate themselves. I find the greatest way to help people is to be with them, not just physically, but to really be there for them, empathetically and emotionally.”

Some of the clients that Dave Busby used to help gave him the nickname of ‘People Saver’. Dave used to joke about this. “I think that’s an overstatement,” he said to me those many years ago. “On the other hand, if you help people to live fuller lives, and find solutions for their real problems – their medical needs, their housing or their social problems – then I guess maybe you’re doing something important.”

And indeed that’s exactly the sort of work the David Busby Street Centre continues to do for the 170 people who visit it each day.

The David Busby Streetlight Gala starts tonight at 7pm at Jumpin’ Jax on Mulcaster Street, next to the MacLaren Art Gallery. Tickets are $50.00 and available at the door. Tax receipts for $20.00 will be provided. For more information, phone Michelle Guy at 725-9719. 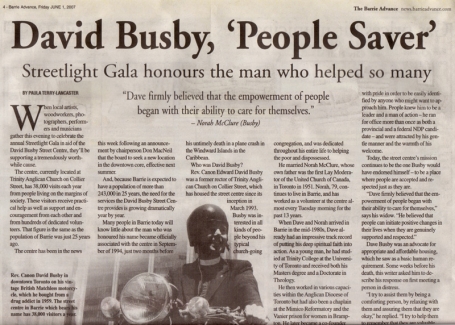