In its quiet north central residential district, Barrie had a fresh and rude awakening last weekend. It was a small, living room affair, no laser light shows or industrial strength subwoofers hammering away at the body and brain. This city attracts big-name stars to the noisy glamour of nightclubs and festivals or to the tied-down and dressed-up ambience of a symphonic concert. None matched the intimate conviviality of the house concert at the home of Sandra and Rob Ruttan last Saturday night of May 10th.

Sandra opened the evening with a folk song accompanied by Alyssa Wright’s lovely cello counterpoint. Sandra’s poignant accounts of personal mid-life explorations and her musical settings of husband Rob’s poetry gave us a glimpse of a soul’s pilgrimage. Whether it was “Homeward Bound” (not Paul Simon, by any means), “Three steps forward, Two Steps back”, (a fetching five-four audience participation piece) or “Like a Woman” (a meditation of a life change), Sandra’s melodic line, voice and considerable keyboard skills reminded us “there is a path through every moment”. Her songs, a well-consummated marriage of poetry and music, carried us with lively images and deep feeling. They are a testament to tenacity and courage to follow your heart’s true path.

Sandra, by the way, will be a featured soloist with the Huronia Symphony Orchestra this coming fall, to play Mozart’s Piano Concerto in C major – the one with the central movement that was used in the movie “Elvira Madigan”.

Paula’s songs followed with a biting, acerbic wit and keen, discerning eye of the human condition. Love lost in “Mavourneen’s Lament”, love sought and not quite found in “Maple Sugar Sadness”, a wonderfully moving Gospel-tinged ode to her dying father in “Vandals in the Temple”, and the shattering images of a crippled justice system in “Fanfare for the Common Felon”; these songs conveyed a sense of personal longing, anger, fear and hope in Paula’s own journey of change and discovery. As she sang “In the heart of every raindrop/ is the fear of how exactly it will die,” I caught more than a whiff of the mortality and joy our human existence brings us. These women opened the way with word and melody to the headline of the evening – Big Rude Jake.

Big Rude Jake is Jacob Hiebert, songwriter and singer extraordinaire. He stopped at my place for a rest and supper before the concert. It turned out to be his first house concert. The delayed bus trip brought him in later than expected but we still had time to talk of philosophy (Nietzsche and Wittgenstein), religion(Mennonites, Zwingli and Buddhism), friends (why strong faith sometimes collapses completely in a life crisis) and family (remembering to phone home) – anything but music. That was for later, when the music did its own talking.

Jake is a man of a Mennonite background whose own journey to Zen Buddhism brings him to sing a mean and sometimes singularly raunchy lyric and piercing observation of the darker side of humanity. He has six CDs to his credit (and is working on a seventh) and a band that plays regularly at the Reservoir Lounge in Toronto . His style harks back to the traditions of early 20th century North American jazz and blues – think of Robert Johnson, Rev. Gary Davis, King Oliver, Fats Waller and Sonny Burke. There’s a big echo of Leon Redbone in the music we heard that night. That, and throw in some good old smoke- and whiskey-tinged not-so-double-entendre whorehouse blues, New Orleans funeral march, pre-war German Cabaret, punk, and some very dark lyrics (“Don’t speak to me of love/ on your lips the words sound like a sickness…), Jake sang and played with just the right amount of irony and fun – which meant in some cases being completely over the top. It was as if Noel Coward and Baudelaire got together at the Simcoe Hotel and shared more than a couple of beers on a boozy rain drenched Saturday night.

With his two-tone brogues tapping the hardwood floor, Jake regaled us with road stories and banter– which, at a house concert, turns into more of a conversation than a heckle. It was a musical joyride that took us through the lives of fools, ca ds, cynics, sad sacks (“Lovesick Lullaby,”) romantic dreamers and a particularly dark one, “The Road out of Hell”. He sang a sharp commentary of an economic downturn in Toronto , “Hard Junction Blues,” that evoked the smell of old cheap plastic and hot exhaust-drenched pavement. And we laughed ourselves silly as, in the tradition of double-entendre blues, he performed a hilarious take on Internet porn addiction and auto-eroticism. Something to do with a monkey getting caught in a candy box…

Who knew that a bartender’s view of the world could be so right, so cool and so damn funny?

Well done, Paula, Sandra and Jake! We hope to hear more from you.

The cultural planners of Barrie would do well to pay attention to these living room soirees. They are the seeds from which our community life grows.

Edward Moll is the Business Manager of the Huronia Symphony Orchestra and a teacher at The Huronia Arts Academy and Bach 2 Rock. To contact him, please call 730-5705. 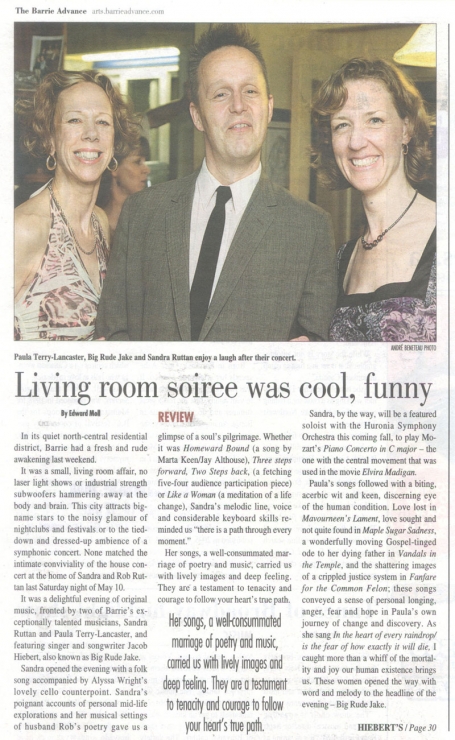