Vandals in the Temple Premiere — The Barrie Advance

Two local musicians have been invited to open for Toronto-based singer/songwriter, Big Rude Jake, at a concert here in Barrie on Saturday May 10th. The pair, Sandra Ruttan and Paula Terry-Lancaster, were spotted by Jake, whose real name is A. Jacob Hiebert, when they were performing their original work at The Free Times Café on College Street in Toronto recently.

Big Rude Jake is one of the country’s leading proponents of house concerts, or informal gatherings of friends who come together in private homes to listen to performers. In this kind of setting, especially popular within folk music circles, ticket prices are lowered because no expensive venue needs to be rented; the artists are guaranteed a packed house and a convivial crowd, and the concert itself becomes very intimate and rewarding for performers and audience alike.

Jake has been a legendary swing performer on the Toronto scene for many years. His music has appeared both on film and television and he has six albums under his belt. In addition to international touring and his regular performances, Jake has created a program called Aqua Vitae, which makes live music accessible to the elderly in nursing homes and hospitals. His recent performances have had rave reviews in the Globe & Mail, the Toronto Star, Flare magazine and the Edmonton Journal. His seventh album, Quicksand, is due to be released this summer. For more information, visit www.bigrudejake.ca.

Sandra Ruttan, the owner of StudioVivo, will feature as the guest soloist for a performance of Mozart’s Piano Concerto Number 21 in C Major with the Huronia Symphony Orchestra this autumn. She also teaches piano at the Huronia Arts Academy on Toronto Street and has made regular appearances with Opera Barrie, the Apollo Chamber Orchestra, the New Tecumseth Singers and the Amity Piano Trio.

Selections of Paula Terry-Lancaster’s poetry will be published in the international journal, Labour of Love, this summer. She was one of five judges at the Toronto Slam Poetry finals last week, and won the Audience Choice award at last month’s Toronto WordJam competition. Her new CD, Vandals in the Temple, is due to be released this summer.

Tickets for the Saturday May 10th concert, which starts at 7.30pm at 10 Lay Street, near the Duckworth/Wellington St. intersection, can be obtained by phoning 728-3079 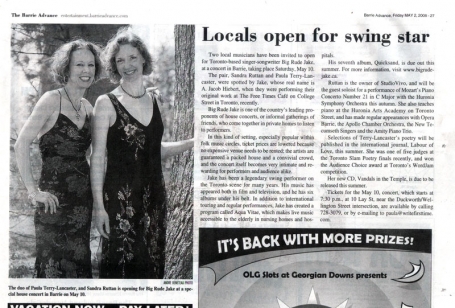