When Dee Nguyen, who with her husband, Lang, owns the East End Variety Café on Blake Street, flew to Australia last month to take her second child to begin law school at the University of Sydney, it was an event she couldn’t possibly have imagined almost 30 years ago

Because, in the spring of 1978, Dee, Lang and their 3-month-old baby daughter were among a group of 180 people on an open 20-foot raft in the middle of the South China Sea, in imminent danger of drowning.

They were amongst the so-called Vietnamese Boat People who fled the Communist regime in great peril. And in the decade following the end of the Vietnamese war, Canada would welcome over 100,000 more immigrants from Vietnam.

Dee and Lang’s story is both dramatic and terrifying Almost unbelievably, the Viet Cong invaded Saigon, where Dee and Lang were both high school teachers, in the middle of their wedding reception, on April 30th 1975, exactly 32 years ago this month!

Total havoc was wreaked in the city, with hundreds of thousands of people trying to flee to the coast, 150 kilometres away, to escape the bombing and destruction.

Lang was arrested that very day, in his wedding attire, and taken to a brainwashing facility by the Communists, where, as an internee, he was indoctrinated with Communist ideology and propaganda.

He spent more than two years in a series of forced labour camps planting new communal farms and clearing forests, but even twelve months after his arrest Dee had no idea of his actual whereabouts, and she feared he might be dead.

She was eventually permitted by the new Communist authorities to remain in her teaching job, but as the wife of a non-Communist, she could be fired at any time in favour of a Party member.

One day, miraculously, she received a letter from a girlfriend who lived in a different city in what is now South Vietnam. The friend told Dee that she was sure she had seen Lang with a group of other men in the forest just outside her town.

Amazed at this news, Dee immediately travelled for days across the country to visit her friend, and from a secret vantage point in a house near the forest did indeed spy her husband at 5 o’clock in the morning, carrying wood. That was the first confirmation she had that Lang was still alive!

A few weeks after Dee’s sighting of Lang, after she had returned to Saigon, it transpired that, while digging in the forest to convert it to farmland, the inmates of the camp had inadvertently set off mines and explosives that the American forces had buried there before the Communists set up their operation.

When the ground beneath them started to erupt, Lang and hundreds of other workers began to run.

Lang had been in a small group of four men when the first explosion took place. Because he was short-sighted, he was wearing glasses. As they were running, Lang’s glasses fell off and he couldn’t see. He immediately fell to the ground and lay flat on his face.

His three colleagues, who kept running, were all killed a few seconds later, just a few metres ahead of him. The fact that his glasses had fallen from his face had literally saved his life.

From 1975 to 1977, Lang was moved to three different labour camps. Dee continued to teach Biology and Vietnamese at the central girls’ high school in Saigon. However, the school system was completely understaffed, and because Lang had been a teacher he was eventually released. The attempt to convert him to Communism had utterly failed.

Dee was cleaning her house not expecting Lang when he suddenly arrived home. She hardly recognized him. He was bloated from the dried salt-preserved food on which he’d lived for almost three years. But he was alive, and he was home!

Dee became pregnant shortly after Lang’s release and in February of 1978 she gave birth to a baby daughter, Quynh, The family was now more desperate than ever to escape the Communist regime. Fishermen in the coastal regions were building boats and charging outrageous amounts of money to get people out of the country, but the vessels were deathtraps and the voyages fraught with extreme danger.

Dee and Lang’s extended family secretly rallied round to raise the necessary gold bars to get them on one such boat. They were told they’d be amongst only fifty people on their boat, but in actual fact when they gathered at the secret place of departure there were almost 180, and the boat, which was really little more than a raft, was only 20 feet long.

Dee and Lang were terrified when they discovered the condition of their vessel, but there was no turning back. Clutching their baby daughter, they got on the boat and prayed for their own safety.

Finally, in the middle of the night miles out to sea with the boat capsizing beneath them, they used toothpaste on parts of the collapsing craft to make large SOS signs which they held up to American helicopters who had begun patrolling above them.

They were guided by the Americans to an oil rig and then airlifted to a refugee camp in Malaysia where they spent six months housed in huts constructed in the trees, because of the venomous snakes and insects in the surrounding jungle.

Meanwhile, people and organizations throughout the developed world were fundraising and attempting to sponsor as many of the now-famous Boat People as they could, and Dee and Lang discovered in 1979 that they had been sponsored by the Alliance Church in Orillia.

They were taken in a Canadian Forces plane to an Army base in Edmonton, and then put on a second plane to Toronto, and taken to Orillia. For their first five years in Canada they worked constantly, round the clock, learning English, cooking in restaurants and picking strawberries on a farm in Alliston.

They moved to Barrie in 1985, and have run the busy East End Variety store ever since.

So next time you’re looking for a friendly chat over a meal or a cup of coffee, don’t hesitate to drop by the café at 193 Blake Street.

Dee and Lang will proudly tell you that the tiny girl in the collapsing boat is now both a Ph.D. and a Doctor of Medicine, who attended the University of Glasgow in Scotland and who now resides in the U.K.

Their son, Hoang, now 23, was born in Canada and attended Eastview Secondary School and York University, prior to beginning his Law degree.

And as for Dee and Lang, you’ll find them still working hard, day in and day out – after 32 years of a marriage that really began with a bang! 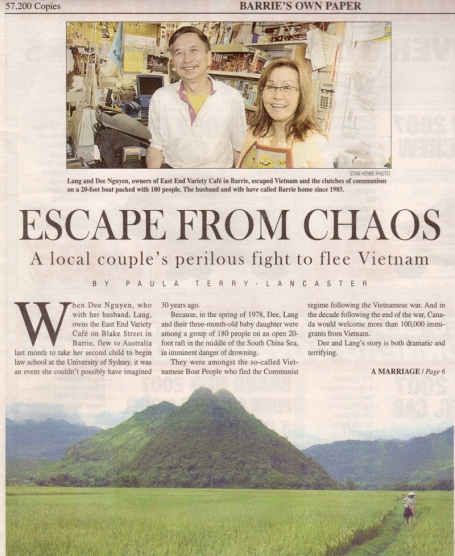