While the hardware has made great progress,

there is more to a laptop sale than selling

In most instances, the product is so good you’d think it would sell itself. But the truth is, while the hardware is finally getting up to speed, laptops are still specialized products that demand sophisticated marketing strategies. There are a myriad of potential uses, and a wide variety of machines for resellers to choose from. Being successful in laptop sales means having the imagination and the foresight to see potential applications, and offer a total solution – including software – to end-users.

The greatest opportunity for laptop sales lies within niche vertical markets. Financial, accounting and sales people are the most obvious candidates for laptops, and collectively account for the greatest percentage of users in terms of both units and dollars. Many accountants are using laptops as dumb terminals in the office and then extracting from the mainframe al the relevant information they need to take to a client’s’ office.

According to Tod Rehm, general manager, Toshiba of Canada, Information Systems Division, Markham, Ont., this ‘information-to-go’ segment of the market has huge potential. The Auditor General of Canada has standardized on Toshiba portables and has developed its own software package – IDEA – in conjunctions with the CICA specifically for the laptops. The Big Eight accounting firms are also going portable.

The other most logical beneficiaries are field sales candidates. Chrysler Canada, Levi Strauss & Co. (Canada) Inc. and Aetna Insurance are three blue-chip companies whose sales forces are now entirely automated with laptops and for whom the investment already seems to be paying dividends.

‘Because of the high return on investment, productivity soars if laptops are being used appropriately – if the product is right, if the system is right and if the application is right,’ says Gerry Pesut, VP, general manager, GRiD Computer Systems, Toronto. GRiD distributes its product directly to end-users. ‘We work closely with software manufacturers and end-user companies to get all these things right, through our own industrial specialists and our own field sales engineers where necessary,’ says Pesut.

NEC is another pioneer in creative laptop marketing. The company is bundling its laptops with specially-prepared software packages for insurance companies.

‘All our research shows that insurance agents with laptops and properly-prepared, custom-tailored software show a dramatic increase in successful closing,’ says Anthony de Cristofaro, national sales manger, NEC Canada, Mississauga, Ont., ‘Test results show a success rate of fully 70% with a computer, compared with only 32% without one. You can do “what if”scenarios until the client is convinced, and there’s no “getting back to you” with figures as a desperation follow-up. Besides, a computer can’t lie, and the potential client – even if he’s not remotely computer literate – can see the figures on the screen throughout the meeting.’

As well as automated sales forces, service forces can also be fully computerized to gain a competitive edge, Philips Electronics used portables for its field repairmen, enabling the force to identify inventory, spare parts and consumer service records quickly and accurately. With laptops, CAD/CAM designers and engineers do not have to trade power and performance for portability.

Innovative applications abound for laptops – the realms of application being only as limited as the marketer’s imagination. In the CBC, all journalists and correspondents have been standardized on laptops equipped with WordPerfect. Toshiba’s model T100 is being used extensively in the ‘Distance Education’ program run by the University of Waterloo and devised jointly by the University and the Ministry of Education in conjunction with Toshiba. This project allows students from rural parts of Northern Ontario to have electronic access to a university education in an off-campus environment, reaching them in their own homes and bringing them the full academic curriculum without requiring their actual presence in the classroom.

Laptops are also being used as a reading and math tool by the Ministry of Indian & Northern Affairs in teaching native children on reserves. NEC Multispeed laptops are similarly being used by the University of Waterloo, this time in another project – Project Area. This is an experimental system whereby students have direct electronic access to their individual tutors through the medium of ‘fill-up’ stations, where information can be both sent and received on a one-to-one basis. The pilot project – which has the potential to change the whole shape of education as we know it – has been running for two years and is ‘soon hoped to roll out to many other universities and colleges across North America,’ says De Cristofaro.

‘Because of the portability of the machines, little time is wasted, and your professor or academic supervisor is always there when you need him – a huge advantage over the more conventional system where a teacher’s time is often over-subscribed by enthusiastic pupils, each anxious to have as much time as possible from their respective mentors,’ adds De Cristofaro.

Laptops are also being used at the Hugh Macmillan Medical Centre in Toronto as built-in portables on wheelchairs. Fore the CNIB, specially–adapted voice-boards have been developed for Toshiba portables. The Toronto Board of Education is using portables in special programs for its handicapped and disabled students. Users confirm that the machines make ‘a world of difference’ to their everyday lives in this regard, in terms of the quality and scope of their communications. Toronto General Hospital is using NEC Multispeed laptops to monitor and control the use of anesthesia during operations, with specially-conceived and highly-sensitive software developed by a TGH doctor.

Not all potential markets are so vertical. Whatever the specific application, there’s no doubt that there are manifold uses for laptops in the area of increased personal productivity; the ever-popular concept of time management. Users who replace the in-flight magazine or paperback novel with a laptop on a five-hour flight, for example, can alight with their work completed, rather than face the prospect of five hours to be done when they return to the office. Little wonder, then that the rise in popularity of the laptop has coincided as it has with the equally dramatic surge in sales of cellular telephones – both technologies with the ability to increase people’s time management and accessibility.

Ironically, the really innovative and creative laptop marketers seem to be the manufacturers themselves. Many resellers who carry laptop products are doing little to add value to the boxes they are selling. Can the manufacturers be faulted for not educating their dealer networks sufficiently well, or are dealers to be blamed for showing insufficient understanding of the products they are selling? Or, is it simply a situation where resellers are not as convinces as manufacturers that the laptop market has arrived?

‘Field sales forces haven’t really emerged yet, probably because although (many companies) academically believe productivity will soar, it’s a different matter when it comes to writing the cheques for a fleet of laptops,’ says Ron McNab, VP marketing, Crowntek Business Centres, Toronto. ‘Even our own salesforce don’t have them because we’re not 100% convinced (of their efficacy).’

Sandy Bracalante of Entre Computer Centres in Toronto comments that laptops are ‘not appropriate’ for writers. Jack Fernandes, VP marketing for BDH, a Toronto-based computer dealership that touts itself in radio announcements as being a laptop application specialist, says his company doesn’t bundle any software packages with its machines to make them more attractive to identified specific vertical groups.

‘Laptop buyers tend not to be first-time users,’ says Fernandes. ‘They usually have some experience with desktop models, so they generally want to carry on with whatever software they’ve been using before and buy a new laptop machine for the added convenience of portability.’

While Anthony De Cristofaro of NEC says he agrees the laptop is attractive to the already-familiar PC user, he says he thinks it will also create an entirely new category of first-time users. To miss this massive group in one’s marketing efforts is, therefore, to walk away from massive numbers of potential sales.

‘There are many people who are going to say, “Well, I hadn’t been entirely convinced of the need for a computer until now, but with this laptop phenomenon and all the advantages it brings, I think the time has finally come for me to try one,” says De Cristofaro. ‘This is particularly true of the really light-weight models.

‘And yet you no longer have to substitute power for portability at the high-end of the portable market. You don’t have to make the “either” portability “or” power decision – you can have them both, in one and the same computer. It’s overlapping on desktop sales to a certain extent, because people are coming to understand that, for a small premium, the flexibility and portability are real benefits, well worth having.’

But the real potential of laptops is unlikely to significantly cannibalize desktop sales, adds De Cristofaro. ‘Research conducted by NEC shows that, of potential and actual PC owners, fully 74% thought portability was a real benefit. However, laptops currently represent only 7% of the total PC market. This means that there’s enormous potential for growth, and as manufacturers adapt products with greater flexibility to the demands of end-users, the market is simply going to explode.’

It seems that there are many and varied opportunities that exist for resellers that need to be fully exploited. The current laptop models on the market have – by and large – succeeded in overcoming many of the obstacles that, until recently, positioned them as a second-best alternative to a desktop. Their graphics are in many instances now on a par with the best desktop machines, they’re powerful enough for most day-to-day applications and they’re no longer ‘luggables’ but often really slim and sexy little machines.

If, therefore, as many forecasters predict, the laptop is about to blow the roof off the PC market, resellers should really make it their business to understand the applications for these machines as intimately as they can. The marketing of today’s most high-tech equipment demands no less than a thorough understanding and a real display of sophisticated end-user knowledge.

Paula Terry is a freelance writer living in Toronto. 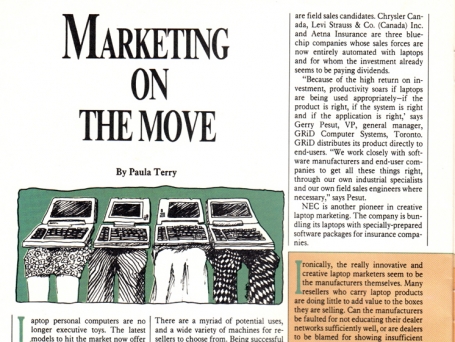