A visceral gasp was heard in the main auditorium of Central Collegiate last Sunday afternoon when whispers passed around the crowd of close to 1,200 people, many of them students, that Stephen Lewis had entered the building. As one of Canada’s most internationally-recognized statesmen, and as one of the world’s greatest orators, arguably, since Winston Churchill, Lewis has attained a cult-figure hero status amongst many social justice activists around the world, who know the nature of his current work, and the urgency and passion with which he pursues it.

Lewis was born into a Canadian political dynasty, the son of former federal New Democratic Party leader David Lewis, and became himself the leader of the Ontario New Democrats in 1970. He was educated at Harbord Collegiate in Toronto and later four different universities. Curiously, despite this, he actually achieved no degree at all on its own merits, despite having no fewer than 25 Honourary degrees conferred upon him since that time, and receiving the Companion of the Order of Canada, our country’s highest honour, in 2002.

Lewis became well-loved by CBC radio listeners in the 1980s as part of Peter Gzowski’s regular political roundtable on the show Morningside. In 1984 he was appointed by Governor General Jeanne Sauvé as Canadian Ambassador to the United Nations, on the recommendation of then-Prime Minister, Brian Mulroney. Lewis subsequently went on to become Deputy Director of UNICEF in the 1990s, and most importantly, from 2001 to 2006, was the United Nations Special Enjoy for HIV/AIDS in Africa.

It was his experience in this latter capacity that led to his forming the Stephen Lewis Foundation, the charitable organization that helps people affected and infected by HIV/AIDS in Africa. And it was his ongoing work on that continent that Lewis chose to speak about, with searing passion and raw emotion, to the sold-out crowd at Central Collegiate this past weekend.

The afternoon began with three songs performed by the Barrie Regional Youth Choir, conducted by Catherine Robertson. One of the songs, sung in Swahili, helped establish the rhythms and sounds of the African continent, to which all of Dr. Lewis’s efforts are now directed.

After being welcomed by Central Collegiate student, Janine McKay, Dr. Lewis immediately acknowledged the year-long efforts of the organizing committee, anchored by a group of six United Churches in Barrie: Collier Street; Central; Grace; North West; Midhurst and Burton. He told the crowd that he was ‘demonstrably happy’ to be in Barrie, and praised the riding’s newly elected Liberal MPP, while making it clear, as a partisan socialist, that he’d have preferred us to have voted for Larry Taylor of the New Democratic Party. He predicted that Dalton McGuinty would, and should, most definitely appoint Aileen Carroll, whom he called a ‘dear friend,’ into his new Cabinet.

Once Dr. Lewis began to talk about the state of the AIDS pandemic in Africa, the time for self-deprecation and humour was over. He talked about the lamentable state of funding for the African crisis from the Western world, and announced a bracing and shocking statistic: that the single highest cause of death amongst African-Americans aged 20 – 35 in the United States was from AIDS. If that’s the state of the crisis on our own continent, said Lewis, the crisis in Africa is worse by a factor of thousands.

The need for drugs, which can prolong lives by decades, is absolutely critical. Many of the world’s millions of HIV victims in the developing world will simply die before drugs are available to treat them. And yet the drugs they so desperately need are already available – it’s simply a question of money and distribution.

Lewis applauded the work of Bill Clinton, whom he described as ‘astonishingly charismatic,’ and the Clinton Foundation, in negotiating with pharmaceutical companies and getting generic drugs to HIV victims in India, for example, at a fraction of the cost of the proprietary, patented medicines. In India, Clinton had managed, with his driving zeal to right the injustices of the world, to get the cost of antiretroviral drugs down from thousands of dollars to just US$139 per person per year – an incredible achievement.

However, it’s only what Lewis called the ‘first-line’ drugs that are available generically. The second- and third-tier drugs currently available are still patent-protected, and thus far too expensive for governments in African countries, where huge numbers of people, as in India, live on much less than a dollar a day.

Lewis went on to say that 500,000 babies were born in Africa with HIV every year. In the Western World, including Canada, drugs are given to HIV-positive women during the birthing process, which results in a reduction of the total numbers of babies born with the virus to infected mothers right down to under one per cent. He told his audience that he had come to the conclusion that to many in the West, it was apparent that African lives were simply of little consequence. He felt these two sets of statistics revealed a ‘fetid juxtaposition’ of the respective value of life in two different parts of the world.

The AIDS virus, Lewis explained, moves with manipulative dexterity. Twenty-five years have been spent looking for a vaccine, to no avail. As recently as two weeks ago, the pharmaceutical giant, Merck, abandoned clinical trials when it became apparent they were not successful. The search for an effective microbicide is at least 5 or 6 years away, and indeed trials of this therapy have also been abandoned, when it was recently discovered that those using a once-promising microbicide were in fact dying at a higher rate than the control group.

Male circumcision seems to reduce the transmission rates, but this procedure has to be conducted in surgically-secure environments, which are not always present in third-world countries. There have been some efforts at pre-exposure prophylaxis, which, in other words, means treating people who don’t have the virus as though they did, in an attempt to reduce the numbers who contract it in the first place.

So efforts are being made in many different areas, and significant prevention campaigns are also achieving some effectiveness in Africa, many of them targeted at young people between the ages of 15 and 24. However, the HIV virus, Lewis concluded, had to date outwitted, more than any other human communicable disease, all scientific attempts to thwart it.

The most gruesome part of Lewis’s talk involved the massive sexual and gender inequality in many parts of the African continent, where women and girls, who do the vast majority of the work in their communities, have no voice at all in terms of sexual negotiation. Huge numbers of African men have concurrent sexual partners, and there exists an overwhelming sense of male entitlement.

The countries of Uganda and Ghana have gone some way in trying to address this imbalance by the use of billboard campaigns, urging men to exercise restraint. And yet, said Lewis, the catastrophe of gender inequality in combination with poverty, hunger and conflict in so many African states, have together caused a huge destabilization of societies, further traumatized by the spectre of many other terminal diseases, of which HIV is but one more killer.

Sexual violence by men against women has exacerbated the AIDS crisis enormously. In the Eastern Congo, said Lewis, it has literally been what he described as ‘open hunting season’ against women, and the damage done to millions of women and girls is almost beyond the capacity of the human mind to comprehend. Lewis gave anecdotal evidence to his audience, many of them visibly shocked by his words, of the ‘merciless mutilation’ and ‘insensate brutalization’ of women by men in many of these war-torn African states. Lewis has concluded that the struggle for gender equality in all parts of the world has become the single most important battle for humanity on the planet.

Meanwhile, by 2010 there will be 20 million children orphaned to AIDS in the continent of Africa alone. In these AIDS-ravaged societies, it’s the grandmothers, women in their 60s and often 70s, who have buried their sons and daughters and who are now raising 10 and 12 grandchildren, mothering, in effect, for a second time. When those grandmothers die, the eldest siblings, in what Lewis called ‘a bizarre twist of the human dynamic,’ who are often just young children themselves, take the place of the parent.

That’s why the Grandmothers to Grandmothers organization was established as a official affiliate of the Stephen Lewis Foundation, whose Barrie chapter were active at Sunday’s event. These women provide emotional and financial support to African grandmothers from grandmothers here in the West, channeling the proceeds of their fundraising activities directly through the Foundation itself. Cherry Robinson, a member of the Barrie chapter, who was selling locally home-made teddy bears to be sent to children affected by AIDS in Africa at Central Collegiate on Sunday, reports that the local group has raised almost $12,000 to help quell the African AIDS crisis in just a few short months.

Appalling as were many of the scenes Lewis has witnessed in his lifetime of travel to Africa in the course of his work, he kept his real condemnation for the countries of the Western world, and the repeated broken promises of Western governments when it comes to providing funds to assist in alleviating the pandemic. His Foundation has raised over $26 million in 4 years, but all of it from over 60,000, mostly Canadian, individuals, not from corporations, business or government.

He praised the World Bank for realizing, finally, that their ‘structural adjustments’ with regard to global debt had had the effect of ‘ransacking’ African countries. And he was proud of the acknowledgment of a small handful of progressive nations like Norway that debts made to African despots, that suited Western purposes during the Cold War, had now come to be regarded officially as ‘odious debts,’ which should never have been made in the first place.

He singled out Gordon Brown, the new British Prime Minister, for insisting on his recent visit to the United Nations that decades of broken promises on the part of the G8 countries be finally honoured. And he was appalled that our own Prime Minister, Stephen Harper, had not even committed to any dollar amount in the fight against global AIDS, choosing instead to say that Canada’s response ‘would be decided in due course’ when all the other G8 countries had at least pledged something, albeit much less than they’d originally promised.

Lewis assured his crowd, who hung on his words for just over an hour, that the fight against AIDS in Africa was the single greatest thing that could be done to further democracy on that continent. He confirmed to this writer that the ten billion dollars spent every month on the war in Iraq, had it been spent on the African HIV crisis, would have saved many millions of lives.

At the end of the presentation, Barrie North Collegiate student, Sarah Hoedlmoser, thanked Dr. Lewis for his important visit to our city. ‘In all my adult life,’ said Lewis, in his closing remarks, ‘I’ve believed that when one part of the human family is under siege, the privileged part must respond’.

‘By being here,’ he told his audience, ‘that’s what you’re doing today.’

The Stephen Lewis Foundation can be reached at www.stephenlewisfoundation.org For the local chapter of the Grandmothers to Grandmothers affiliate, contact President JoAnne O’Shea at 728-1651. 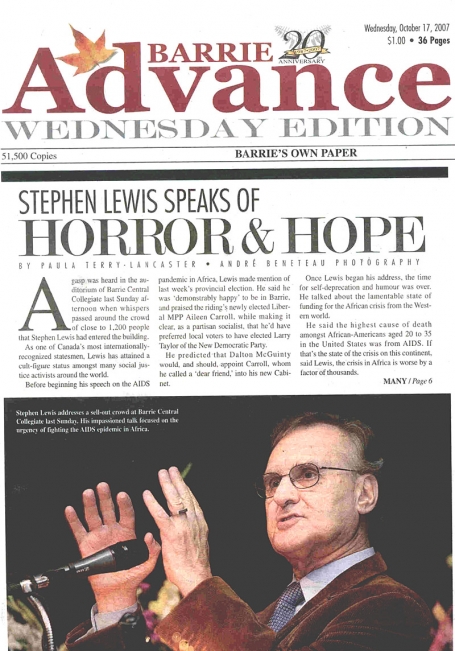