The website for This Is London, the überchic club on Richmond West that hosted last night’s Rally for Democracy, boasts that it has the ‘opulence of an old-world English Gentleman’s Club’. And that may be true, but it’s precisely the more pernicious aspects of the Old Boys’ club that Elizabeth May, the feisty and tenacious leader of the Green Party of Canada, is seeking to overcome in her quest for just treatment and participation in the upcoming leaders’ debates, the first of which will be televised next Tuesday.

Dr. May is tenacity incarnate, the only one of the national party leaders to have been made an Officer of the Order of Canada. She’s also the only leader to have become a Canadian by choice, having been formerly what many of the world’s peoples continue to regard as a member of the Lucky Sperm Club – an American by birth. Her love of Canada and the values for which it once stood run river deep, mountain high. And her followers, once passionate, now incandescent with rage over what they regard as her arbitrary exclusion from the campaign’s most critical element from which to convert the undecided, have deluged the nation’s media with their indignation at her treatment, apparently (so far) to no avail. In Wildean tradition, however, the attendant coverage has meant her name has been at the forefront of prime-time, home-page news since the starting gun fired on March 26th. She has become to the national media in the past week what The Mary Ellen Carter has become to Canadian folk music.

May, one of the finest, most spontaneous orators of our times, spoke as she always does, never with notes, always with passion and fluidity. One can’t fail to be impressed by the immediate access she has to an infinity of facts and figures, completely engaging her listeners, letting the stats of recent history bear testament to the decline of the country she adores. As well as Greens in Great Numbers, unaffiliated men, women, children and youth crowded the dance floor in the same way grandmothers and young men had attended Saturday’s Slut Walk, determined to register their own personal outrage, to do everything one individual could do. This was not an amorphous community in any sense of the word. This was truly a highly cohesive, engaged, pumped group of supporters. This was the kind of highly personal rallying-round one sees perhaps most often in the wake of an unexpected tragedy, this coalescence of the shocked and the heartbroken around their beloved leader and the ideals they hold so dear.

Who’s Afraid of Elizabeth May?

Camille Labchuk, Deputy Director of Communications, entered the packed venue with May, who had just flown from BC to Toronto and was taking the train to Montreal for the next rally as soon as this one was over. “If you’re angry, express that anger into something positive,” said Labchuk. “For goodness’ sake, go Green!” Constantine Kritsonis, a stalwart supporter who had just organized a flash mob at the CBC, said that executives there, in the last hour, had admitted that in their own polls, 85% of respondents wanted Elizabeth in the debates. Yet still, they had stalled. Ralph Benmergui, former CBC stalwart turned consultant to the Greens, sounding fairly sanguine, said that May’s exclusion from the debates ‘was just a tiny part of the problem. The problem, in its vastness, is the whole need for electoral reform.’ Mobbed by a sea of green, as she made her way to the stage, May confided that Phil Tunley, the lawyer for the consortium, had stated in open court on Tuesday morning that if she took part, ‘perhaps the others wouldn’t show up’. ‘Given what happened last time’, said May, ‘that’s my suspicion.’

Mike Schreiner, Leader of the Ontario Greens, gave a brief address, followed by Chris Lea, former head of the federal party in the 1990s. He called May’s exclusion from the debates ‘patently ridiculous’. ‘In ’93, we had 79 candidates across the country,” he said. ‘Now we have a full slate and the million votes we got last time is higher than most Green parties in the world. If our votes were as concentrated as the Bloc’s, we’d already have members in Parliament.’

May’s words were scarcely audible when she took the stage until the cheers of the crowd finally dwindled. She spoke movingly of students in the Middle East and Canadian soldiers in Afghanistan laying down their lives for democracy whilst at home a group of commercial broadcasters were its arbiters, its heirs apparent. She spoke of Stephen Harper’s having been twice in the last eight weeks to within five blocks of the Green Party offices in the riding of Saanich-Gulf Islands, where she is running full-on against the Conservative incumbent. Whilst there, Harper had, with fanfare, announced the Conservatives’ position on income splitting. ‘It’s been part of our platform for fully six years,’ said May, with no small indignation.

May was at her most vehement on the subject of the ‘corporate control of Canadian journalism’. No one knew how the ‘consortium of broadcasters’ had determined the rules, what the criteria were, what pressures had been brought to bear, and by whom. All we knew is that ‘they’ had spoken. ‘Who’s the They?’ she asked her listeners. She cited a Royal Commission of the 1980s that had declared that the concentration of media was ‘dangerous and unhealthy in a democracy’ – and that, she said, ‘was before Conrad Black bought everything up!’ She described the conflict of media interest as being ‘as broad as a barn door’ and from there chastised, like an authoritative schoolmarm, the current Prime Minister’s Office for its radical departure from traditional Canadian custom and practice. ‘The PMO under Lester Pearson,’ she said, ‘was a handful of stenographers. Now we have hundreds of people, living on tax dollars, deciding to put the interests of the Conservative Party ahead of the interests of the Canadian people! They cheer when they’re told to cheer, they jeer when they’re told to jeer, they sit down, they shut up. That’s not democracy, that’s an elected dictatorship!’ At this point, the crowd went wild, and television cameras clashed with each other at the foot of the podium.’

The American-style partisan nature of Canadian politics – ‘like a disease running rampant’ – was the next target of May’s wrath, except it’s hard to interpret it as wrath: it’s as though she’s really suffering with this, as though what politics has become is to her a very profound and heartfelt disappointment. ‘The whole thing is directed by spin doctors, who have no idea what they’re winning for, except for their own political gain.’ As to the chattering classes’ ‘fear’ of a coalition, May was completely adamant. ‘One of the most effective governments this country ever had was under Lester Pearson in coalition with David Lewis. They gave Canadians their best ever investment in the future: healthcare!’ Once again, the crowd became a swirling green sea, as the simplicity, the acuity of May’s words took hold.

May wants a Commission appointed to examine what took place on the streets of Toronto during the G20 summit. She talked about the erosion of women’s rights under Harper; the underhand excision of the clause giving female civil servants pay equity; the cutting of funds to Planned Parenthood around the world and, famously, to KAIROS. ‘No wonder Canada has lost its seat on the Security Council, and has one of its own being tortured in Guantanamo Bay because of having been forced to be a child soldier!’ she said, ever more emotionally. ‘We’re one out of one hundred and seventy countries that declares that a legally binding treaty like Kyoto suddenly means nothing to us at all’.

And then she spoke of the culture in Ottawa of divisiveness ‘even when consensus is sitting right in front of you’. She speaks, movingly, of the Veterans’ Affairs advocate, Sean Bruyea, lamenting the fact that the Harper government now pays out one lesser lump sum to vets, to avoid giving a greater sum in total over time. ‘He told me that to veterans, and to the more than 100,000 Canadians who have given their lives for their country, my exclusion from the debates is offensive.’ And she spoke of the outpouring of support she has received across the country, not just from the Ombudsman of Radio Canada, the Ombudsman of the CBC, public figures like Margaret Atwood, Farley Mowat, acerbic right-wing journalist Andrew Coyne – ‘He’s angrier than I am’ – and former PMs Joe Clark and Paul Martin. ‘But just last night,’ she said, ‘something happened that brought tears to my eyes. The Right Honourable John Turner said to me “I’m so proud of you.”’

Yesterday morning, before the Rally, the Green Party platform had been announced in Ottawa, under the triptych ‘Smart Economy, Strong Communities, True Democracy’. As May left the podium after a plea for a return to the traditional values of Canada – ‘Not “what’s in it for me?”, but “what’s in it for us?’” – and disappeared into the arms of her energized and adoring audience, I found myself thinking of the late June Callwood, Queen Mother of Canadian social justice, and found myself smiling in the darkness. I’m pretty sure she’d have had a thing or two to say about the current state of civic affairs, and I’m pretty sure Dr. Elizabeth May knows exactly what she’d be likely to have said. 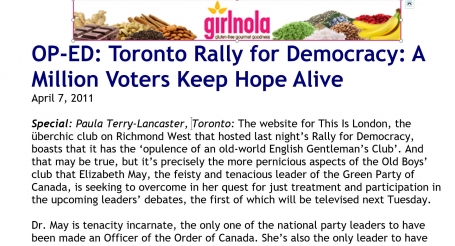