Kyle Newton, a Grade 10 student at Eastview, wants to run away to the circus. The 15-year-old, who’s been doing gymnastics for almost a decade, hopes to have an audition with the world-famous Cirque du Soleil in Montreal this summer – and we in Barrie have every reason to root for him.

The internationally-renowned Cirque du Soleil trains 200 new performers a year in its Montreal studio, and Kyle’s hoping to become one of them. Of the 800 artists in Cirque, twenty percent are replaced annually, and with a commitment to adding one new show every year, Cirque is constantly creating fresh acrobatic acts. Its casting scouts troll the world for potential talent: seventy-five percent of its new recruits have a background in sports, and of those the vast majority come from Eastern Europe. Twenty percent, however, are Canadian.

Born in Richmond Hill, Kyle’s lived in Barrie almost all his life and is the youngest of 6 children. He started with the Barrie Kempettes as a six-year-old, and competed in Gymnastics Ontario from the age of 9 to 12, but then he stopped competing completely. “I lost interest because the rigours of the Provincial organization were too disciplined,” he explains, adding that it was the artistic component of gymnastics that interested him more than sheer technical ability. In the summer of 2004, while on holiday in Las Vegas with his parents, he was completely blown away by a show called Circus Circus, in which circus performers from all over the world entertained children every half an hour in the lobby of his hotel. “The acts were absolutely awesome, and I knew immediately that this was exactly what I wanted to do,” he says. “The creative aspect was incredible.”

It all started in Baie-Saint-Paul, a small town near Quebec City. There, in the early 1980s, a band of colourful characters roamed the streets, striding on stilts, juggling, dancing, breathing fire, and playing music. They were Les Échassiers de Baie-Saint-Paul (the Baie-Saint-Paul Stiltwalkers), a street theatre group founded by Gilles Ste.-Croix. Already, the townsfolk were impressed and intrigued by the young performers – who included one Guy Laliberté who became founder and CEO of Cirque du Soleil .

The troupe went on to found Le Club des Talons Hauts (the High Heels Club), and then, in 1982, organized La Fête Foraine de Baie-Saint-Paul, a cultural event in which street performers from all over met to exchange ideas and enliven the streets of the town for a few days. La Fête Foraine was repeated in 1983 and 1984. Le Club des Talons Hauts attracted notice, and Guy Laliberté, Gilles Ste.-Croix and their cronies began to cherish a crazy dream: to create a Quebec circus and take the troupe travelling around the world.

In 1984, Quebec City was celebrating the 450th anniversary of Canada’s discovery by Jacques Cartier, and they needed a show that would carry the festivities out across the province. Guy Laliberté presented a proposal for a show called Cirque du Soleil (Circus of the Sun), and succeeded in convincing the organizers. And Cirque du Soleil hasn’t stopped since!

Returning from Vegas, Kyle went to see Cirque’s show, Alegria, in Toronto. He fell in love with every aspect of the performance. He also bought a DVD of another Cirque show, Quidam, which featured an artist, Isabelle Chasee, performing on what he calls ‘silks’ – 50 feet vertical strands of polyester in which she does wraps and falls. Inspired by her, this is the routine in which Kyle is now becoming a specialist.

He went back to the Ontario Gymnastics routine “not so much for the rigours of discipline but really to get more flexibility and muscular development,” says Kyle. However, within months he was bored again. He started doing his silks routine in his garage, developing his strength and his climbing skills, and using only the fabric for support.

Last year he went to Florida at March Break and saw another Cirque show, La Nouba, at Disneyworld. On his return home, he met a juggler at the Victoria Day celebrations on the waterfront here in Barrie, who owns a training facility for circus performers in downtown Toronto called The Centre of Gravity. Before long, Kyle was getting free coaching at the facility in exchange for doing promotional work, and he spent the whole of last summer there, training with The Zero Gravity circus. “I learned a whole host of circus disciplines – stilting, rolla bolla, trapeze, aerial loops, contortion, manipulation, tightrope and juggling,” says Kyle. By the time Cirque du Soleil rolled out their latest show, Corteo, just a few months ago, Kyle was determined to be ready for auditions later this year.

He’s now a part-time staff member both at the Y in Barrie, where he helps teach the Kindergym program and recreational gymnastics, and also at the Georgian Wonders gym, where he’ll soon be teaching the first boys’ program as well as various circus disciplines. He performed his silks routine at the Y’s big children’s party just before Christmas, to the delight of all who attended it. “I call myself a circus performer, rather than a gymnast,” says Kyle.

He also hopes to have an audition with L’Ecole National de Cirque, the national circus school, which is also in Montreal, and from which Cirque du Soleil do a lot of their recruiting; and a third audition with a smaller rival Montreal-based circus called Cirque Eos. “My family have always been tremendously supportive,” says Kyle.

Perhaps his father, Ted, deserves the last word. “Kyle doesn’t really have to run away to the circus,” he says. “I’ll very gladly drive him there!” 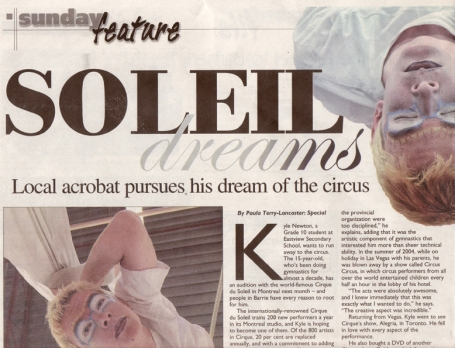