Here in Barrie we’ve come to expect sneak peeks of Olympic-level skaters at the Mariposa Club, and Elvis Stojko was, for many years, our adopted hometown son. But if you can find a parking spot at the Goodlife Fitness Club on Commerce Park Drive – which is pretty difficult, given that 800 people use the facility every day – you’ll discover another Olympic superstar, Curtis Hibbert.

Curtis dominated the Canadian artistic gymnastics scene for over a decade, in the ‘80s and ‘90s, winning 6 National titles. He was the very first Canadian to win a World Championship medal in gymnastics, too. And he picked up 5 Gold medals, a Silver and a Bronze in a single Commonwealth Games, in Auckland in 1990. He’s a two-time Olympian: He represented Canada, first in Seoul in 1988 – leading Canada to a best-ever 9th place as a team, and finishing in the top-ten in many individual events – and again in Barcelona in 1992.

“I love Barrie,” says Curtis, who bought a home here on Minet’s Point about 3 years ago. Born in Kingston, Jamaica in 1966, Curtis emigrated to Canada with his whole family in 1972, and was ‘discovered’ as a child prodigy while living in Toronto. He trained from the age of 7 at York Memorial High School, and then from the age of 11 at York University, under the watchful eye of National Team coach, the legendary Tom Zivic. The rest became history.

Once he left the competitive world of amateur athletics, Curtis worked at Canada’s Wonderland, doing the high-dive show four times a day, off the mountain into the water. “I was trained by a world-champion high diver,” he says. “The whole thing was tightly choreographed, and we did four shows a day for four years.” Presumably, the discipline of his competitive years gave him the stamina to keep going. “It was performing, and I’d always been a performer,” he says.

Later, Curtis became a stuntman in the movies – a job he’s had now for almost 10 years. “I usually get at least a day or two on any show of any size that’s being shot in Toronto,” he says. He’s worked on Undercover Brother, Tuxedo, X-Men, Chicago and, most recently, 16 Blocks, which stars Bruce Willis. “I was the guy that drove the car into the pole in Assault on Precinct 13,” he remembers. “There are two or three other stuntmen who live in the Barrie area. It’s obviously the place to be.”

He owned a gym in Mississauga for a while, prior to moving to Barrie. Julie Thom, Goodlife’s Fitness Manager, hired him in an instant just six weeks ago. “He’d been a member here,” says Julie. “He took our Can Fit Pro course because he was interested in becoming a Personal Trainer. That’s Goodlife’s minimum requirement. He’s now one of thirteen Trainers on staff at our facility, and he’s doing a wonderful job for us. His clients think he’s fantastic.”

Private sector needs to do its part

Curtis feels the private sector is driving the personal fitness movement by appealling to ordinary people, accommodating their schedules and making facilities like Goodlife both accessible and attractive. He also sees the private sector as being the prime target for amateur gymnastics sponsorship. “The government can only do so much,” he says, on the topic of funding for amateur sport. “Rather than waiting for public money, private corporations should be asked to step up to the plate and fund the wonderful young talent our country continues to produce.”

He’s very optimistic about Canada’s current bunch of young gymnasts, which includes his successor and buddy, Kyle Shewfelt. Curtis recently attended the Road to Champions Gala in Toronto, an event which celebrated Canada’s premier athletes and their journeys in becoming champions, and which also raised funds for today’s best-ranked hopefuls. “Funding can really determine which countries perform best in the international arena,” he says. “Without the money you simply can’t get the highest levels of achievement.”

So is Curtis Hibbert likely to be the public face of the Goodlife club any time soon? “I’m here to work, not to get publicity,” he says. “I still get a real adrenalin rush from being in shape and pushing myself to the limit. I love helping ordinary people improve their fitness, get in shape, achieve their own goals. If I can make a difference in the overall health of my clients, that’s reward enough for me.”

No wonder there’s no space in the Goodlife car park! With a charming, intelligent staff member like Curtis in town, there’ll soon be more shapely, fit people in Barrie than ever before. 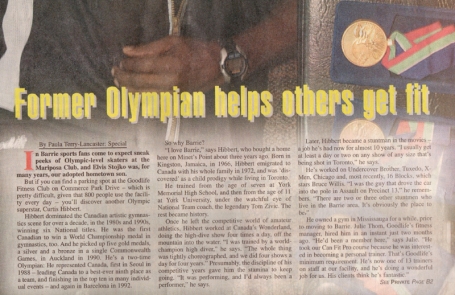