When Dr. David Suzuki, the Canadian environmentalist, scientist and broadcaster, began his speech to a room of nearly 800 students at Barrie North Collegiate last Friday, he told them that Leonardo DiCaprio, the Hollywood actor, had phoned him just the day before.

“Come with me to the Cannes Film Festival tomorrow, Dave,” asked DiCaprio, who’s launching his new documentary, The Eleventh Hour, in which Suzuki appears. “It’ll be all expenses paid!”

And with that, Suzuki, 71 – voted the Greatest Living Canadian in the CBC’s national poll and a Companion of the Order of Canada, the country’s most prestigious civilian honour – began an hour-long address specifically targeted to teenagers, as the keynote speaker at the ‘Every Day is Earth Day’ event, for which students at Barrie North had been planning for over a year.

Perhaps the most outstanding aspect of Friday’s event, however, wasn’t just the fact that there were so many hundreds of kids in the school’s gym who’d packed the place to hear his message. The real highlight for the organizational team was that, throughout the whole of Simcoe County, thousands of other students were hearing Dr. Suzuki live, as he spoke, through the miracle of video conferencing.

In 15 other schools within the District School Board – and indeed in 5 other locations at the Barrie North campus itself – thousands more elementary and high school kids were able to watch the same event, which effectively meant that on Friday, Suzuki’s words were heard by almost 15,000 local area students.

The technology, which was pioneered by Communications Technology students at Barrie North in conjunction with Board staff, meant that students, parents and teachers could watch Suzuki without leaving their home schools. This effectively kept hundreds of school buses off the roads that day, preventing additional greenhouse gas emissions from spewing out on local roads this Holiday weekend.

On Saturday night, Suzuki spoke again, this time to a primarily adult crowd at Georgian College’s massive Athletic Centre, and once again had close to a thousand Barrie-area residents hanging on his words.

Suzuki, whose enthusiasm and passion for the environment is completely contagious, is one of the world’s most pre-eminent environmental activists and commentators. The recipient of 18 honourary degrees and Doctorates, and the author of 32 books, half of which are written for children, he is highly respected both within the scientific community and by opinion leaders in many disciplines.

The message about the insanity of over-consumption and the need to take urgent measures now to prevent imminent environmental catastrophe is one that resonates closely with the messages of former U.S. Vice-President, Al Gore; the new leader of the Federal Green Party and former Sierra Club director, Elizabeth May; the military historian Gwynne Dyer, himself a frequent visitor to Barrie, who feels that climate change is the most pressing problem facing humanity; and the British journalist, author and activist George Monbiot, whose book Heat: How to Stop the Planet Burning was quoted by Suzuki on his earlier visit to Barrie in February of this year.

Barry Thompson, the Vice Chair for Living Green, the Barrie-based grass-roots organization that Suzuki referred to as his ‘local partner,’ was one of the opening speakers at the Saturday evening event. He’s also the Energy & Environment Officer for the City of Barrie.

Thompson referred to the many environmental initiatives that the City has taken that have put Barrie at the vanguard of environmentally-positive Ontario cities. Current water conservation measures have decreased consumption by 100 litres per person per day compared to 10 years ago.

Passive parks are no longer treated with any kind of pesticide. The new waste reduction programs, including the Green Box initiative, are amongst the most aggressive in the country, and the City has recently purchased four hybrid vehicles and is testing biodiesel fuel in its fleet.

Council intends to approve an exploratory wind turbine study very shortly, said Thompson, and the City’s goal is to bring about a 25% further reduction in energy use over the next four years.

Suzuki talked at both his venues about the fact that the vast majority of the world’s current population has been born since 1950. One of the consequences of this demographic shift is the fact that people simply don’t have a collective memory of what was regarded as a normal way of life through most of human history, in the days before the developed world became addicted to the acquisition and accumulation of so-called ‘disposable’ items.

He talked about his ongoing respect for Aboriginal peoples, who know that their connection to the land is of vital importance to them, and cited also the pressing need for young people to connect with senior citizens, to find out about life in a pre-disposable culture.

Winifred Boyd, 86, the oldest person in Suzuki’s Saturday audience, agreed with Dr. Suzuki. “We were all very happy back in the old days,” said Mrs. Boyd. “We were completely content with only a fraction of the stuff that people seem to think they need today.”

The main emphasis of both Suzuki’s talks was on the fact that the human species became the predominant one – despite having been on Earth for only the most recent 150,000 years of the planet’s 3.5 billion year history – because of our ability to anticipate a future.

Other animals’ brains are such that they have only a memory of the past and an experience of the present, but humans, thanks to their superior brain capacity from their earliest evolution, have always been able to shape their collective futures, which is what has led us to our current position of overwhelming dominance as a ‘super-species’.

Dr. Suzuki argues that this very ability to anticipate and shape a future – humanity’s greatest strength over the millennia – has now been apparently relinquished by us humans at a time when we need this capability more than ever. We need to plan to avoid the catastrophic consequences of climate change and environmental degradation – from a security point of view, an economic point of view and a humanitarian point of view – by using our genetic capacity to understand that what we do today can affect our collective future. Our very survival as a species, warns Dr. Suzuki, is at stake.

This past weekend, just as he did three months ago here in Barrie on his 30-day, 41-stop tour of Canada, Suzuki reminded his listeners that the environment has consistently been cited as the number one priority amongst Canadians of all demographics in every recent opinion poll.

At Saturday night’s talk, he reported that, having gathered the views of 30,000 individual Canadians, people from coast to coast overwhelmingly want the Federal and Provincial governments to:

2. Introduce a carbon tax to help meet our Kyoto commitments

3. Entrench the right to clean water, breathable air and a safe food supply in the Constitution

4. Identify and protect the habitat that species at risk need to recover

Dr. Suzuki, at the end of both of his talks, urged his listeners to take part in his Canada-wide Nature Challenge, which can be found on the website of the David Suzuki Foundation, www.davidsuzuki.org.

The Foundation, in consultation with the Union of Concerned Scientists, researched the 10 most effective ways to help conserve nature and improve the quality of life for everyone. The Challenge invites Canadians to adopt at least three simple practices from a list of ten that are easy to implement into their everyday lives. The list is as follows:

* Choose an energy-efficient home and appliances

* Choose a home close to work or school

Currently, 325,000 Canadians, including Margaret Atwood, Nelly Furtado, Sam Roberts and Robert Munsch, are signed up for this initiative, and Dr. Suzuki told the crowd that he expects to see a huge increase in the number of people from the Barrie area signing up for the program in the weeks ahead.

At both this weekend’s events, Dr. Suzuki was asked by a member of the audience why he didn’t consider running for political office. On both occasions, while publicly stating that, in his view, the Green Party is the only party endorsing all of the environmental initiatives that he feels Canadians insist upon, he said that he believes that he has the ability to influence far greater numbers of people in his capacity as a non-politically aligned activist.

Students Alyssa Cirtwell and Madiha Khan, both members of the Barrie North Environmental Awareness Team, described Dr. Suzuki as being powerfully and dramatically inspiring. “I want to study environmental science when I leave North,” said Cirtwell. “Dr. Suzuki is the greatest example I could possibly aspire to.”

Certainly, as a species, it seems we need a champion like Dr. Suzuki if we’re to have any hope at all of saving us from ourselves. 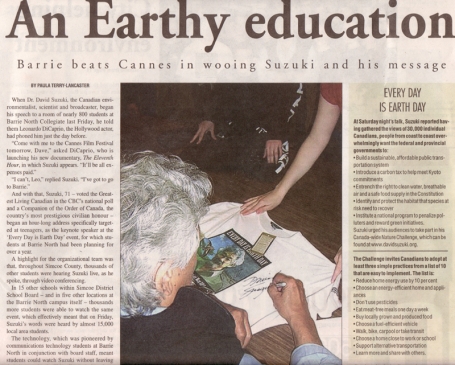