There’s good news for francophone residents in the City of Barrie. The French language radio station, CFRH 88.1FM, has recently moved its transmission tower from La Fontaine to Blue Mountain, making the station much easier to pick up clearly here in the Barrie area.

The station, newly re-launched as CFRH La Vague (‘The Wave’) is part of the cultural umbrella organization called La Clé d’la Baie (‘The Key to the Bay’), which serves French-speakers throughout the whole of Simcoe County. La Clé, which has offices both in Penetang and at 320 Bayfield Street here in Barrie, employs over 60 people, and provides cultural activities for a community of thousands of francophones in the Greater Barrie area.

“According to Statistics Canada, there are over 15,000 francophones in Simcoe County, many of them living in the City of Barrie,” explains Peter Hominuk, Executive Director of La Clé. “In addition, fully 43% of the population of Base Borden is currently francophone. Our organization is the key to unlocking access to francophone services and activities for native French speakers, and we work hard to advocate for the growing francophone community throughout the whole county.”

La Clé provides daycare services at Base Borden and at La Source school here in Barrie. It also runs an Early Years francophone service at the Bayfield Mall, where the organization has over 4,000 square feet of space. Additionally, it runs Camp Bivouac, a summer camp for francophone kids aged 5 – 12, which takes place in both Barrie and Penetang, and also hosts an Annual Gala which honours five local francophone women and takes place each March in Penetanguishene.

There are almost 549,000 francophones in Ontario, who comprise five per cent of the province’s total population, making it the biggest francophone community in Canada outside Quebec. The Franco-Ontarian flag, which is green and white and comprises both a trillium and a fleur de lys, was first launched in Sudbury in 1975 but only enshrined into law as an official emblem by the Queen in 2001.

Says Joanne David, a Barrie resident francophone: “La Clé d’la Baie represents francophones right across Simcoe County. It gives us cohesion as a minority group and helps provide us with the services we need, in the fields of education, literacy, training and employment. It’s an invaluable organization to us, in terms of our language and culture. It’s an avid advocate for the needs of French-speaking people here in the City of Barrie and beyond.”

Forthcoming events organized by La Clé include a French-language component of the upcoming Mariposa Festival. This year, there will be four francophone bands participating in the festivities – Genticorum, Neil LeFaive et Le Gang, Madrigala and Joëlle Roy – and CFRH presenter Steve Lapierre will be one of the Masters of Ceremonies. Further information is available at www.mariposafolk.com.

On July 12th, La Clé will participate in the annual Barrie Ribfest and Craft & Beer Show at Memorial Square, where Suzanne Roy and Donna Vaillancourt will seek to defend the title they won last year as the winners of the Best BBQ Sauce award.

And on July 13th – 15th, the Festival du Loup (‘Festival of the Wolf’) takes place in La Fontaine and includes music by Damien Robitaille, Chakidor and Yves Lambert. More information is available at www.festivalduloup.on.ca. 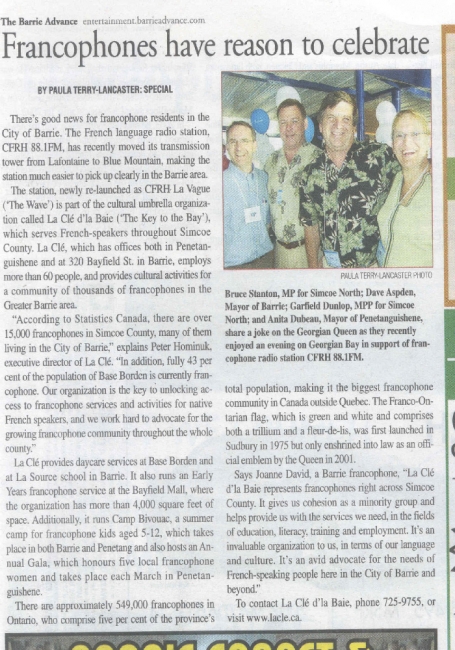