When Rosie Romita of Rosie’s Diner at 24 Dunlop St. W., decided to try to raise $10,000 to help the victims of last week’s downtown fire at Mary and Dunlop, she knew she’d need collaborators to get the job done.

Rosie, who hosts Christmas and Easter dinners for the poor at her restaurant, and who’ll be hosting a Thanksgiving dinner this year as well, wanted to raise funds specifically to help the three business owners whose stores were devastated by the fire, as well as the 10 residents in the upper-level rooming house who lost their homes.

Rosie approached Trinity Anglican Church on Collier St. in the first instance to see if they’d provide the venue for a lunch and dinner, as well as a place for local performers to provide entertainment, with space for a silent auction.

Father Andrew Sandilands, Associate Priest at Trinity, said he’d be thrilled to help. “We’re a downtown church with a long track record of serving the needs of the downtown community,” he said. “These are our brothers and sisters, in a time of crisis.”

Those affected by the fire will not be receiving cash of any kind. Rather, the money raised will be converted into certificates to buy furniture and household items, or used to purchase commercial materials and equipment to help the store owners get back into business.

“We’d invested two years of our lives and over eighty thousand dollars into our restaurant,” said Kateryna Kolotylo, whose delicatessen, What A Dish, was one of three businesses affected. “This level of community support makes our loss so much easier to bear.”

The Society of St. Vincent de Paul, a Roman Catholic organization, was also keen to provide assistance, and the David Busby Street Centre provided space to house the donations that came in from the community at large. “This has really been a completely co-operative effort amongst all sorts of people and organizations in our community,” said Romita.

Playing the role of Master of Ceremonies throughout the day were local entrepreneurs, Bob Vinton and Myran Jones, who plan to open a jazz bar shortly in the downtown core.

Rick Jones, Chair of the Simcoe County Alliance for the Homeless and current Director of the Police Services Board, said of the Benefit: “This is symbolic of what every well-functioning community should be doing. It’s proof that Barrie’s a city and a community that cares.”

By the end of Sunday’s benefit, Louise Stinson, Executive Director of the David Busby Street Centre, was pleased to report that, of the ten rooming house residents who lost their homes, eight had already been helped to find new temporary or permanent accommodation.

“Considering that it’s the middle of summer and there are only two staff members at the Centre right now, we’re very pleased that we’ve been able to help re-house so many of the victims,” said Stinston. “We’re confident the remaining two people will find housing within the next few days.”

On Saturday July 21st, there will be two additional fundraisers – a Cutathon, where people will be able to get their hair cut in exchange for cash donations, and also a huge garage sale, both to be held at Trinity Anglican Church, with proceeds going towards the benefit fund. 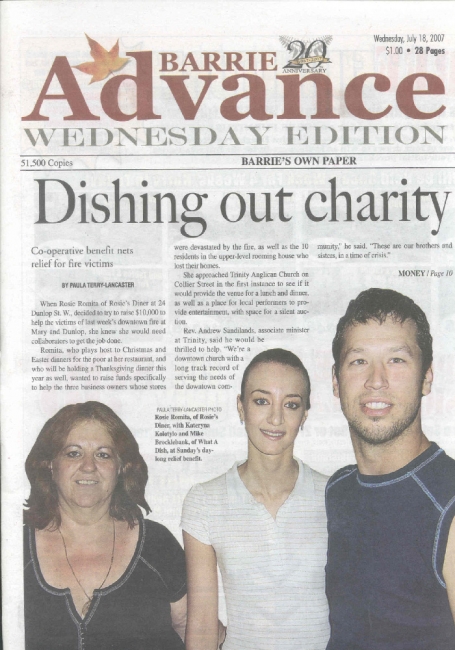