It’s always difficult to predict a season’s top-selling retail items in the jewellery market. But complicate the task with a troubling economic climate and the job becomes truly formidable. Just to prove the old adage that no two experts will ever agree on anything, most major Canadian suppliers have their own opinions as to which will be the overall best-selling pieces this Christmas.

Charles Gillman of Gillcraft Jewellery Ltd. predicts that traditional staples will perform well. These include earrings, neckchains, bracelets and charms all in 10 and 14 karat gold, as well as in Gillcraft’s patented, no-tarnish sterling. ‘Even though last Christmas was thought to be relatively soft, these items did well for us, and this year seems likely to be softer still,’ he says. Gillcraft’s traditional favourites range in retail price from $19.50 to around $99.50 for sterling pieces, and from $29.50 to $499.95 for those in 14 karat gold.

Pat Cooney of Burkhardt Jewellers agrees that traditional styling will do well, but he feels the best bets this Fall will be lockets, pins and pearls, ‘and within each of those product categories, one item will emerge as a clear best seller,’ he says. ‘Obviously there will be variations between retailers dependent on location or the type of clientele, but, on the whole, the classics will exhibit the most strength this season. Because of the currently hard-pressed economy, I think people will tend to be more conservative about the kind of money they spend, and the kind of pieces they spend it on. No one will be kicking the doors down to buy jewellery this Christmas.

Sammy Yunger of Adelaide Super Jewellers Ltd. thinks the media have portrayed the economy as being much more depressed than it really is. ‘It’s true that consumers with moderate levels of disposable income may not buy jewellery at all this pre-Christmas,’ he says. ‘But to those with cash in abundance, and there are such people in significant numbers in Canada, I believe the economy will be no deterrent.’

Yunger predicts that high earners will purchase high-ticket items, with custom pieces being the season’s real winners. ‘Everyone today wants something distinctive – something completely unique to them,’ he says. ‘It’s true at the top-end of the market and it’s true in the moderate range too. Heavy gold necklaces will do well, as will choker sets – interesting ones, nothing run-of-the-mill. Italian gold will be strong and so will big and bold Chanel-type pieces. Despite the economy, everyone wants something very individual because most people have all the classic items already. I mean, how many herringbone chains can a woman wear?’

every penny to work hard for them, but

they’re not prepared to

Erol Paylan of Almer Jewellery Ltd. believes the whole industry is in for some pretty tough times. ‘We can’t sell the high-end stuff but we can’t sell the cheap stuff either,’ he laments. ‘I think that a difficult economy will always make consumers extremely shrewd. People want every penny to work hard for them, but they’re not prepared to sacrifice quality. They want to ensure their money is as well spent as possible.’

Paylan predicts that diamond rings up to a retail value of about $750 will be best-sellers, with quality Italian merchandise – especially earrings and bracelets in the $100 to $350 range – selling well too. ‘But nothing too outlandish,’ he warns. ‘In my experience, most Canadians want to look exactly the same as everybody else. This country is definitely an extremely conservative market.’

Although Neil Travis of A&A Jewellers Ltd. can’t say for certain precisely which items will be must-haves for retailers, he’s pretty sure they’ll be at one of two price points: either under $500 or over $2,000. ‘The middle market has been very soft for the past couple of years, and I don’t think this year will be any exception,’ says Travis. ‘The demand from our retailers has been in response to two types of consumers. First, and most importantly, there are those who are looking for quality – in design, in karat, in colour and in size – and who are prepared to pay for it. Secondly, there are people who don’t want to pay more than $499 but who do want something showy.’

“First, there are those

who are looking for

quality and are prepared

to pay for it. Secondly,

who don’t want to pay

who do want something

Travis believes that anniversary bands will generally do well again this season, due in part to the significant efforts of the Diamond Promotion Service. A&A, along with four other major Canadian manufacturers, will be participating in the DPS co-operative Fall campaign, ‘Diamond Sweets’, running in magazines from September to December. ‘And men’s diamonds will be fairly strong too; again, at both the high and low price points,’ says Travis.

For Drew Bricker of D. G. Jewellery of Canada Ltd., the secret lies in trying to reduce retailers’ inventory costs without reducing the number of units they’re able to show. ‘This effectively means that the trend among our customers is to stock items at price points up to $399 rather than expanding prices upwards to $499-plus and stocking fewer units,’ says Bricker.

He predicts a strong increase in the number of ‘promise’ rings, popular amongst the 19-24 year old sector. ‘There’s also renewed popularity in traditional Victorian-look rings,’ he says. ‘These feature lots of filigree, and many are reworked versions of more expensive old favourites. Now, rather than using large diamonds and smaller coloured stones, we’ve reversed the sizes, resulting in much lower price points.’ Bricker also speculates that birthstone rings, ranging from $79 to $140 and often bought by parents for children, will do well this season.

Pearls are this year’s essentials, according to Pierre Akkelian of Canadian Gem Inc., whose company is among the largest distributors of cultured pearls in Canada. ‘All the big European designers are using pearls to accessorize their collections, and necklaces are very much in focus,’ says Akkelian. ‘People today are terribly quality-conscious, and they realize that the classical look is one which endures.’ He favours 18” and 24” single strands as top sellers this Fall, often bought to complement a pair of cultured pearl earrings bought earlier in the year.

‘The necklace, being a more expensive item, is more usually a Christmas gift – a ‘second step’, after purchasing or receiving earrings. Once a woman owns both pearl earrings and a pearl necklace, she may then desire an enhancer as an accessory. Although the Canadian market is not mature enough yet, I see the move toward enhancers – often diamond and pearl combinations, designed specifically to adorn the strand – as the next evolutionary step once the market for pearl ‘staples’ reaches saturation, as it has in Europe.’

“All the big European

much in focus … People

today realize that the

classical look is one

Jeremy Bowman, of International Bullion & Metal Brokers (Canada) Ltd., says he’s extremely comfortable predicting Canada’s best-selling jewellery items this Christmas. ‘We have exclusive distribution rights to a specialty, promotional product which we’re marketing on a worldwide basis and which we launched in July here in Canada,’ he says. The product, called Little Loves’ Gold Jewellery™, comprises 3 different items – earrings, a pendant & a charm bracelet, all in 10 karat gold – packaged in elaborately-illustrated boxes featuring pop-up ‘Edwardian’ teddy bears. Aimed at girls aged 5 to 15, Bowman believes the line will be an enormous success in Canada. ‘Our advance orders so far have been tremendous,’ he says.

Also tipped to succeed by Bowman is what he refers to as ‘rosette’ – filigree, flattened rope chain made of hollow circles ‘which look like interlocking rose petals – hence the name,’ he says. “Rosette chain is very pretty and delicate, and gives a very wide look at an affordable cost.’ Available in 10 and 14 karat gold, rosette earrings retail from $29.99, with bracelets beginning at $99.50.

As for wristwatches this Christmas, look out for new lines from Seiko Canada Inc. The Seiko ‘Age of Discovery’ series, commemorating the five hundredth anniversary of Columbus’ discovery of America in 1992, has a nautical, navigational theme, while a new fashion line – Future Wrist – features high-quality, high-fashion ‘future-looking’ products.

Also new to the Seiko stable is the Flight Computer watch – a men’s premium, high-tech product retailing at $700. All three lines will be heavily supported pre-Christmas on both TV and in print, and Seiko’s Bill Penny predicts they’ll ‘receive a lot of attention’. Penney also believes that Pulsar’s Galileo series, which features old-world European styling; Lorus watches, featuring Loony Tunes and Walt Disney characters, and a new, thin, dressy product from Lassale will all be good sales performers.

For Bruce Smellie, of the Longines Wittnauer Watch Co., the season’s best-sellers will be a new, high-precision line called Yema/Paris – France’s number one-selling wristwatch. ‘Primarily we’ll be importing men’s sport-type fashion watches at the higher end, and these will be supported in consumer magazines pre-Christmas,’ says Smellie. ‘We’re convinced the Yema brand will find a very nice piece of the market, but we also expect there to be pretty good strength over the Longines and Wittnauer lines as a whole.’ 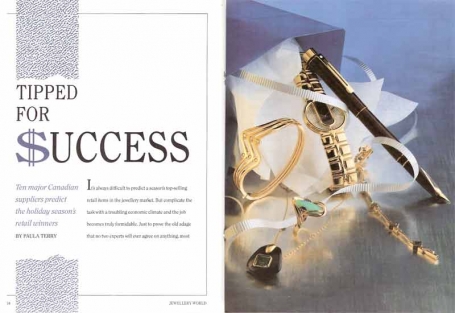