When Beverly Topping made a bid to purchase Great Expectations back in 1983, the previous owner, Harry Haken, chose her from a number of potential suitors because he felt she would ‘know her audience’. Haken felt that Topping, as a woman, a wife and a mother, would have a genuine affinity with Canadian parents-to-be, who make up the magazine’s target group.

Today, as president of Professional Publishing Associates (PPA), ‘knowing her audience’ contributes to be Topping’s personal credo in operating a successful and dynamic marketing company which produces five publications, as well as devising product sampling and direct marketing programs.

PPA’s many publications share a common philosophy – they seek to help, encourage and support expectant parents and the parents of young children by providing sensitive and informative editorial, endorsed by an active editorial advisory board comprised of medical and educational experts. This they do directly, with titles such as the flagship Great Expectations and Today’s Parent – also a market leader in its niche – and indirectly, via titles aimed at health professionals and the childbirth education community, traditionally a difficult market for advertisers to reach.

Indeed, non-conventional, innovative methods of developing readership and circulation have underpinned PPA’s growth over the last seven years. ‘Our long-term corporate objective is to become a full-service resource base for Canadian parents and advertisers, via a whole range of appropriate, targeted products,’ says Topping. ‘We’ve identified enormous opportunities to consolidate our existing, strong relationship with our readers by logical line extensions.’

Topping sees the 1990s as posing very specific hurdles to Canadian business in general and to the Canadian publishing industry in particular. ‘The GST is one factor which will have a negative impact on subscriptions, and I think that mass-market consumer magazines will be amongst the hardest-hit casualties,’ she says.

‘Magazines will survive only if they provide their subscribers with enough quality editorial to justify the additional expense. This means that knowing and understanding your reader, more than ever before, will be of vital, life-or-death importance. Publishers and editors must work wholeheartedly to develop extremely strong and loyal relationships with their readers, and seek to provide real value for money.’

To combat the short-term impact of the GST, which is not retroactive, PPA is actively developing its two- and three-year subscriptions. However, decreasing postal subsidies provide a second prong to what is in effect a double whammy for the Canadian publishing industry in the 1990s.

‘The removal of postal subsidies for controlled publications has already begun,’ says Topping, ‘and this means Canadian publishers will be faced with two options. They will either have to find sources of distribution alternative to Canada Post, or else invest considerable sums of money in converting their controlled subscribers to paying ones, as we at PPA are doing with Today’s Parent.’

This requires actively soliciting not only initial payments but also sustaining memberships through renewals – a costly procedure which can be administratively cumbersome. Additionally, talking to a specific audience requires targeted techniques such as direct mail, which can be terribly expensive.

‘It’s all related to the overwhelming need to provide readers with quality and good value,’ says Topping. ‘Few people are going to start paying for something they have been accustomed to receiving at no charge unless your publication becomes really indispensable to them – something they perceive as not being able to live without.’

going to be a critical

factor in the survival

Increasing environmental awareness among consumers in the ‘90s is another contemporary issue confronting publishers. ‘We’re inundated with mail from our readers on the environmental issue,’ says Topping. ‘Our company has deliberately chosen not to polybag, and we use recycled and recyclable paper wherever possible.

‘We specifically choose not to UV-coat our covers. However, the advertising community at large has simply not been prepared to see their four-colour ads on anything but coated stock. It’s an attitude that will have to change, particularly as the incremental cost of environmentally-acceptable materials decreases, in response to increasing consumer demand.’

Topping believes that the current downturn in the Canadian economy will continue, and act as a ‘macro’ issue which will have a further adverse effect on overall consumer spending, including spending on magazines which are perceived as being only ‘luxury’ items.

‘Consumers want increasingly to be recognized as individuals, and are becoming more and more resistant to traditional mass marketing methods aimed exclusively at maximizing reach,’ she says. ‘Personally, I believe that to be effective in uncertain economic times, television, used in tandem with targeted vertical print advertising, is going to be an optimal combination for delivering carefully-defined audiences.’

Advertisers and marketers are going to have to fine-tune their advertising strategies, and it’s up to publishers to create an environment where that fine-tuning and target marketing can be achieved.

Topping suggests that creative initiatives such as regular, special issues and supplements, targeted at different core reader groups, may be a way of enriching a magazine’s editorial environment, so that marketers can penetrate individual segments of its readership.

‘This, in turn, presents further challenges to publishers, and means that they’ll need to be equally creative in their distribution methods,’ says Topping. ‘Basically, innovation is going to be a critical factor in the survival of magazines.’

Advertisers and marketers are going to

have to fine-tune their advertising strategies,

and it’s up to publishers to create an

environment where that fine-tuning

and target marketing can be achieved.

Because of the vast expense involved in almost ‘customizing’ magazines in this way, Topping feels many small, independent publishing houses, especially those with predominantly controlled circulations, may well go under. ‘I think that well-financed, vertical specialist magazines, with sufficiently large reader bases and the highest editorial standards, will be the winners,’ she says. ‘The biggest companies will succeed too, because they have the most established vehicles, the financial strength to weather the recession and more resources than anyone for implementing new strategic programs. But to do that, research – on every aspect of your readership – will emerge as being more essential than ever to publishers and editors. Throughout the ‘90s, products will be built up based exactly upon their readership profiles.’

The net result, Topping thinks, after all this turbulence, will be a stronger, leaner and more versatile publishing industry. ‘There will be fewer magazines, but those that remain will become much more of a mouthpiece through which advertisers can speak directly to their customers, confident that those customers have been accurately identified,’ she predicts.

‘The onus will be on publishers to find out exactly who their readers are and then to communicate that knowledge to the advertising community.’ But Topping points out that advertisers have very specific responsibilities to readers, too. ‘Clients are going to have to look extremely hard at the messages they are sending, and assess them for honesty, sensitivity and credibility.

‘As consumers become more value-conscious, they’ll reject advertising that over-promises, misses the mark or simply doesn’t ring true. This is going to be the decade where quality, in all its guises, is really what counts.’

Paula Terry is a freelance business writer, based in Toronto. 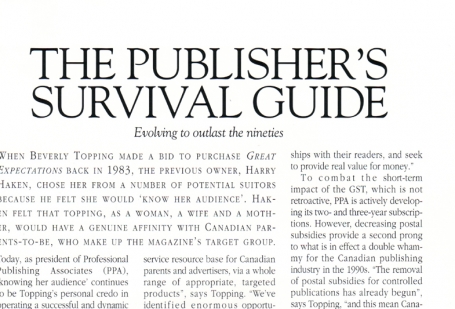