Graham Denton says the reason why his product development firm is so successful is because it has developed a research methodology which is the next best thing to a time machine.

Denton, 42, founder of Product Initiatives and former winner of the American Marketing Association’s Marketer of the Year award, says the firm has averaged nine out of 10 successful products since its inception 12 years ago as part of the Ogilvy and Mather empire.

Now a fully independent Canadian company, PI, which identified, differentiates and assesses products and services for all sizes of corporations, applies the methodology to all areas of product development from corporate or sales strategy to consumer goods and services.

The British-born Denton, who at 25 was one of Britain’s youngest marketing directors, started developing his methodology over a decade ago.

Denton came to Canada specifically to head up Grey Advertising’s Procter and Gamble business but three years later, with O&M’s blessing, he started up PI.

The company’s first client was tobacco products giant RJR-Macdonald, which was looking to extend its Export A line – the top-selling brand of cigarettes in Canada at the time.

‘I’d always been fascinated by the challenge of trying to see into the future and of trying to anticipate what would be successful,’ Denton says.

The majority of products

‘Suddenly we were faced with developing a product where there was absolutely no tangible, perceptible difference on an unbranded basis between competitors,’ says Denton.

‘The only difference in a market like beer or cigarettes is what we call an intuitive difference based entirely on branding. We quickly realized that the classical disciplines, based on analysis and logical deductive thought that had historically been used in NPD (new product development) were quite inappropriate to this kind of environment.

‘So the product we developed – Export A Medium – used a lot of brand-new research methodology we really developed as we went along. It’s something we have perfected in the decade that has elapsed since we started. But we were really one of the first companies in the world to generate a blueprint for the way successful new products should be developed.’

Denton says that in those early days many factors in NPD research which are regarded as common sense today were not recognized, and that NPD was a matter of taking a lot of best guesses and ‘horse-racing’ them against each other.

‘What we basically did was to say, “We don’t know what will work so let’s put together some alternatives and let’s find out not so much which is the best option but, rather, where we should be going.” And once we knew the direction, then and only then did we look for the best execution to get us there. And that was the fundamental principle behind Product Initiatives.’

Denton says NPD at PI has come a long way since then. The company examines what currently exists in the market and hypothesizes what might exist by using a speculative research method first developed on the Export A assignment.

At the same time, every component of the product or service which makes up the proposition the consumer will buy into is identified – formulation, packaging, closure, name, descriptor and price point.

Denton says that by structuring the stimuli for research, PI can tell which pieces are working and which are not, enabling it in time to develop a second-generation concept in which all the pieces work.

“The fact of the matter is that from a creative point of view there will always be room for the “big idea” which can sell 50 more cases of widgets,’ he says.

‘But it won’t help come up with the next generation of widget because markets today are too fragmented and there are no longer any obvious wants or needs.

‘The reason that the majority of products which are introduced fail is that they simply are not new,’ Denton says.

‘Absolutely they are,’ says Denton.‘If you look at corporate North America over the past decade, what you see is that companies are patently incapable of innovation.’

Denton says that to grow, companies need to anticipate the future and develop successful products and services through ‘a creative, speculative thinking process based on current knowledge’.

He says the process is only being used now by NPD companies but predicts in 20 years every successful firm in Canada will use it to develop every area of business.

First, a new product must be one which consumers need or want. Second, it must be one whose point of difference consumers can recognize. Third, it must be a compatible ‘fit’ – it must form a ‘chord of familiarity’ with a company’s image. Fourth, it must have credibility confirmed on delivery; and fifth, its point of difference must be reflected in all aspects of its presentation so that all are working together. 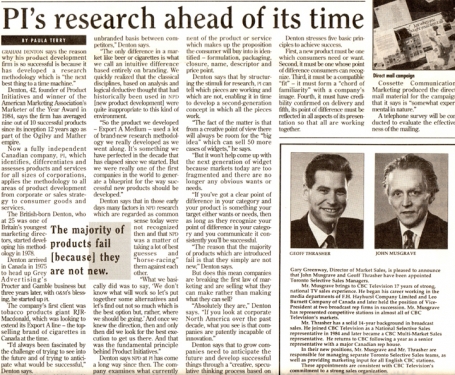