Nothing Clear Cut within Local Environmental Movement – The Barrie Advance

If you think that people who claim to be ‘environmentalists’ or ‘Green activists’ always think identically on every single environmentally-sensitive issue, it’s time to think again.

Right now, the Barrie area faces three significant but tentative proposals – the Big Bay Point resort; the Northern Ethanol plant, and the Sunnidale Park reservoir, on which members of our local community – each of whom claims to represent the environment’s best interests – simply cannot find consensus.

Take the Big Bay Point resort concept, for example. Annabel Slaight, of the group Ladies of the Lake, opposes this idea. “Our concern is, potentially, that this development may be a precedent setter. There are several other marinas around the lake being considered for similar exploitation. No one, as yet, has even the criteria for measuring the impact of thousands more people living on this lake.”

Provincial Green Party candidate, Erich Jacoby-Hawkins, disagrees. He is, generally speaking, in favour of the initiative.

“This region is seeing huge growth pressures which can be steered, but not stopped,” says Jacoby-Hawkins. “In this case, the developers have bent over backwards to reduce their footprint and preserve the very environment that is their main draw to potential buyers. Most area resorts seem content to degrade our environment, even as they feature their natural surroundings in their glossy ads. This project is unlike other proposed marinas in the extraordinary measures they’ve planned to limit and even reverse environmental impacts, like septic failure. By concentrating thousands of cottagers in one small area, they prevent the need for thousands of acres of individual lakefront developments. This is controlled density at its best.”

Dr. Peter Bursztyn, Ph.D., a chemist and Chair of Living Green, agrees with Jacoby-Hawkins. “Living Green is not pro-development. The reality, however, is that lakeshore development is taking place. With that understanding, we support many aspects of this project, including its reduction of the current nutrient flow into the lake. This development will even reverse the current impact of many neighbouring property owners, including those complaining about this development!”

The proposed Northern Ethanol plant similarly has its supporters and detractors within the so-called environmental community. Local realtor Carl Rabinowitz opposes locating the plant in the middle of Barrie’s growing south-end.

“The Northern Ethanol refinery would, by itself, emit three times the amount of pollutants emitted by all of the rest of Barrie’s controlled emitters combined,” says Rabinowitz. “The 379.57 tonnes of regulated pollutants which would be emitted annually by Northern Ethanol would include six known or suspected carcinogens and 16 chemicals classified as harmful to aquatic organisms.”

“Northern Ethanol claims its emissions would all fall within Ministry of Environment and World Health Organization guidelines,” he says. “However, it’s not that long ago that DDT and dioxin were considered to have “safe limits” by similar organizations. Gord Miller, Ontario’s Environmental Commissioner, recently noted that the MOE is usually able to actually monitor only about three to four per cent of Ontario’s controlled emitters anyway, which means that excess emissions even from controlled emitters are a virtual certainty.”

Jacoby-Hawkins agrees with Carl Rabinowitz on the ethanol plant issue. However, Dr. Vincent di Norcia, a corporate ethicist who’s taught for 20 years at several major universities around the world, including the London School of Economics, strongly favours a global strategic switch from 100% oil-based gasoline to an ethanol-gasoline mix containing at least 15% ethanol.

“This is a good baby step but we need a lot more, and soon,” says di Norcia. “Any huge number of emissions into the City of Barrie is the responsibility of the Ministry of the Environment, whose regulations with regards to these localized pollutants obviously need to be far more stringent in the first place. But secondly, any local disadvantage needs to be balanced against the enormous reduction in overall auto emissions and the huge advantages provincially. Diesels and hybrids are a great start, but Canada should adopt 30 mile per gallon auto and 20 mile per gallon truck standards by 2009.”

“The fact is that business and governments still don’t seem to get it,” adds di Norcia, with considerable frustration. “Environmental innovations usually mean tremendous process efficiencies, enormous cost savings and subsequently much greater profits. There’s no excuse any more for ‘being dirty,’ from a business point of view. Fossil fuels are for fossil minds, and the need to move away from their usage is critical.”

As far as the Sunnidale reservoir is concerned, Peggy Staite-Wong is a Barrie-based research consultant, who initially opposed the project because of the impact she fears it will have on the park generally and on the Arboretum she loves, and of which she’s the volunteer co-ordinator through Barrie’s Garden Club.

“I feel that it’s a shame that projects such as the reservoir become so confrontational,” says Staite-Wong. “It’s truly understandable that residents aren’t happy when a major utility like this is planned for a passive park. The City’s Engineering Department, however, feels that the project is fully justified by water demand, and that Sunnidale Park is the best location for it.”

“I personally feel that Canadians’ water demands are excessive by world standards, and no one has asked us citizens whether we’d be willing to reduce our water consumption in order to reduce the number of these large-scale infrastructure projects that communities like ours otherwise have to absorb. Unfortunately, the City of Barrie doesn’t have an environmental advisory committee to help planners and engineers understand and take into account some of the key social issues as they plan such projects. Citizens tend not become involved in the open house process until the project is so far underway that it’s really hard to change direction.”

James Wallace, President of the Federal Green Party Riding, is a local structural engineer who has personally designed underwater reservoirs and who enthusiastically supports the Sunnidale project.

“I believe the water reservoir is necessary, not just for further growth but also to maintain the existing needs of the City, and in my view Sunnidale Park is the perfect place to put it,” says Wallace. “The fact that the park is described as clean, pure and natural sounds like just what I’m looking for in safe drinking water. As far as the environmental impact is concerned, the reservoir, once built, will be no different than a giant rock in the ground. If it ever leaks, it won’t hurt the park and the park isn’t likely to contaminate the water. That’s a win-win situation.”

“The Sunnidale location means the City is taking a parcel of land that it already pays to maintain without current financial return, and will give it additional productive use without any significant harm to the current park user,” says Wallace. “There will of course be the inconvenience of the actual construction to tolerate, but afterwards the reservoir will make the parkland more useful, and therefore more valuable. This will likely mean that Sunnidale Park becomes even more important to the City in the future than it is currently.”

Despite their differing viewpoints on matters of enormous consequence to our community, it seems these environmentalists take a collaborative and collegial approach to problem solving and conflict resolution. Perhaps their example really proves that highly confrontational and divisive positions are not nearly as suited to the civic good as good old-fashioned respect for another’s views, and an acknowledgement of the right to disagree. 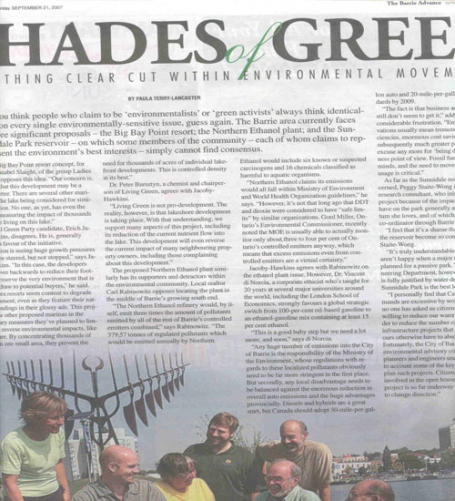