IN THIS HIGH-TECH, FULLY-AUTOMATED AGE, you’d think that the faster life got, the more sense electronic media – such as radio and television – would make for advertisers in the 1990s. Well, that ain’t necessarily so, according to Pegi Gross, Senior Vice President and Director of Media Services at Saatchi and Saatchi, Toronto.

Gross, whose agency billed upwards of $130 million last year and whose clients include Procter & Gamble, Toyota Canada and the Toronto-Dominion Bank, feels that ion today’s complex world, the print medium, and magazines in particular, may still be a marketer’s best bet in terms of advertising effectiveness. And what may come as a further surprise is the fact that Gross, when assessing a specific print medium in terms of its ability to deliver a defined market group, relies on more than just hard data. She allows her intuition to play a large part in the final media selection.

Because of the dramatic growth in the Canadian publishing industry over the past decade, Gross believes that today’s print industry offers marketers a more controlled delivery of the advertising message than electronic media.

‘As TV becomes more and more cluttered and as consumers are bombarded with information at an ever-increasing rate, print really remains the only environment over which a consumer can exert any control,’ explains Gross. ‘Broadcast media, in effect, control the consumer. In print, consumers control the medium. They can absorb information at their own pace and so will ingest it more thoroughly. On TV, the sheer speed of delivery, coupled with today’s sophisticated production elements, can easily obscure a commercial’s principal thrust. The product’s primary selling point can get lost in the dry ice and mirrors. In print, the consumer can linger, re-read, revisit.’

But this greater grasp of consumer attention also puts greater pressure on the marketer to provide a well-structured message. ‘You’d better have something to say,’ warns Gross. ‘You can’t fool the reader, because if there’s no big idea, you’re completely naked in print. There’s no place to hide.’

Gross acknowledges that TV and radio do possess legitimate benefits for specific products. ‘TV allows you to reach huge numbers of people instantaneously. Creatively you can demonstrate a product in action and appeal to viewers on a highly emotional dimension. As for radio, it allows you to target specifically, as most listeners are extremely “station loyal,” and you can also buy frequency at a comparatively affordable price.

‘Furthermore, skilled creative people can make the same creative impact on radio as can be achieved on TV. Properly handled it allows for superb theatre of the mind. But again, these media are passive in that they deny consumers the ability to exercise control over their environment. In contrast, readers actively choose when and where to open a magazine – they choose when and where they are most receptive to information. This, for my money, gives print advertising an important advantage.’

In addition, Gross points out, research has revealed that the less likely consumers are to watch TV, the more likely they are to read magazines.

‘If TV is an advertiser’s chosen medium, there will come a point when, no matter how much frequency is purchased, there will be a certain group of people who will never be reached effectively, and those are light TV viewers. Print, therefore is an excellent medium against those consumers. For example, with estimates revealing that over 70% of the Toronto market are in the work force on either a full- or part-time basis, there’s little chance of reaching them on daytime TV.’

On the other hand, print media offer advertisers greater control over such selected markets than traditional vehicles. ‘It used to be that to reach a specific market you’d have a choice of the local newspapers, local radio or TV,’ says Gross. ‘Now that magazines are able to offer the flexibility of regional splits, however, they give me yet another reason to consider print over more traditional local market vehicles.’

Gross doesn’t deny that quantitative information is essential when assessing a certain print vehicle. ‘You obviously need to be sure that a publication is going to deliver your target group. You need to know its audited circulation figure, its cost per thousand, and its mechanical process.’

She cites PMB – Print Measurement Bureau data, which links readership to product usage – as being very important in this area and a major advantage that print has over broadcast. ‘PMB tells us considerably more about magazine readers than we’ve ever known about broadcast audiences. Until people meters are fully up and running in this country, we won’t know any more about television audience composition than a very basic breakdown based upon age and sex.’

But despite the importance of quantitative data, Gross has learned to rely heavily on an intuitive feel for the overall quality of a magazine. ‘PMB data currently lags its corresponding magazines by up to eighteen months – a very long time in the publishing industry. Over that period, magazines can visibly deteriorate.’

‘Recently, for example there has been a certain decrease in the overall amount of Canadian trade and consumer press advertising revenue. To my mind, this is when many magazine editors make a fundamental error of judgment. They often decrease the investment they’re making in their publication – by reducing costs and the quality of their editorial – to compensate for lost revenues. This signals two things to the advertising community.

‘First, potential advertisers see the amount of decline and therefore suspect that the book is in trouble. And second, they see the quality of the editorial decline. They can’t necessarily tell which factor is the cause and which the effect, but the net result is that media specialists won’t recommend the vehicle in any event, because of the declining standards.

Gross makes her intuitive judgment about many magazines by putting herself in the mindset of her clients’ target group and deciding whether or not the candidate really engages her, from cover to cover. ‘A consumer, after all, only reads a magazine for one of three reasons; for information, for entertainment, or for both. The more intensely readers are absorbed in the editorial, the more intensely they will be influenced by the advertising.

‘It is excruciatingly important to me that the editorial be of significant value to the reader. The worst crime editors can commit, in my opinion, is to underestimate the intelligence of their readers.’

While acknowledging the need for media specialists such as herself, Gross is quick to point out the need for all marketers to understand the basics of all the media available to them. ‘The extraordinary thing about media as a discipline is that, because by and large marketers don’t understand it, they’ll spend millions of dollars based solely on their agency’s recommendations, whereas those same clients will nickel-and-dime even the smallest creative budget to death.

‘It was Marshall McLuhan who said “the medium is the message”. I still believe that. To me, an educated client is the best client of all. I want a client to be actively involved in the media planning function and to understand its overwhelming importance in the marketing context.’

Paula Terry is a freelance business writer and former advertising executive, based in Toronto. 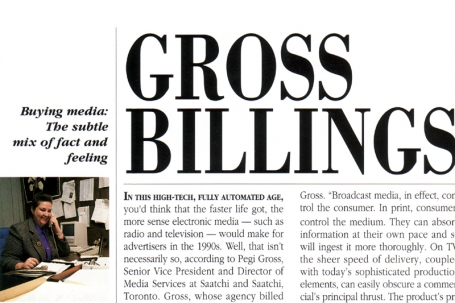