Oil of Olay is one of those classic, international skincare brands that seems to have been around forever and has always had a high level of consumer awareness.

It has been the best-selling brand in its category since the mid-1970s, so its recent repositioning, repackaging and relaunching were carried out from a position of strength.

Developed during the Second World War by a chemist in South Africa as a topical treatment for burns on Britain’s RAF pilots, the Olay ‘beauty lotion’ was introduced to Canada in 1965. By 1970, when the brand was bought by U.S.-based Richardson Vicks, it had already captured 8% of the face cream and lotion market in Canada.

Susan Conn, Olay brand manager at Procter & Gamble, which bought the brand in 1985, says it continued to strengthen its position in the 1970s, building a loyal consumer following. Customer loyalty was due to two key factors: product quality and strength of advertising support.

Consumer research showed that, although users of the brand were thrilled with its performance, non-users perceived Oil of Olay to be a functional, non-glamorous product for ‘older’ women.

As well, advertising campaigns of the 1970s had focused to a considerable degree on ‘male appreciation.’ As women’s attitudes to beauty changed over the ensuing decade, P&G management sought to reposition the brand to encourage trial among younger women, who saw skincare as desirable for a sense of well-being and self-esteem and not simply as a means of attracting men.

P&G was confident that once the younger consumer had tried the product, it would win her over.

Conn says the current advertising campaign, through Miller Myers Bruce DallaCosta, Toronto – ‘How do you stay looking young? You start early and fight like hell’ – projects a younger, more contemporary image which appeals to today’s consumer ‘who is very much her own woman’.

The entire line of eight SKUs – which includes a cleansing bar, moisturizing lotion and moisturizing crème – was repackaged in 1988 by Toronto design firm Michael Peters Group to project a more contemporary image, consistent with the advertising.

In-store demonstrations are now used extensively to encourage trial, as are high value GWP (Gift with Purchase) events, a promotional tool more commonly used by more expensive brands such as Marcelle and Revlon, sold in cosmetic sections. Oil of Olay is seen as occupying the middle ground between these traditionally upmarket rivals on the one hand and its more direct competitors in the toiletries section – Nivea, Noxzema and Pond’s – on the other.

The repositioning has been an enormous success for Oil of Olay and shows P&G’s willingness to ‘invest in the future to keep the brand a leader in an increasingly competitive market,’ says Conn.

A new line extension, Oil of Olay for Sensitive Skin, was launched this spring in recognition of the fact ‘a huge potential segment for us is non-users with sensitive skin.’

Conn says the success of the brand, which still retails in drugstores, mass-merchandisers and food outlets, ‘is proof you can get excellent skin care without having to pay exorbitant prices’. 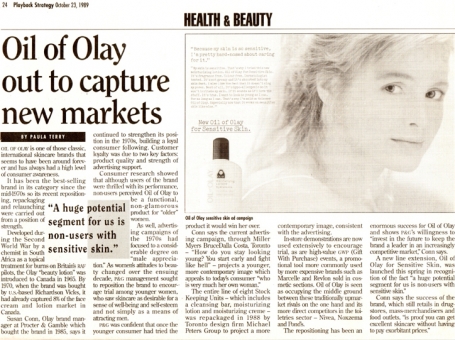