Marketing to the Over 50s — Strategy magazine

They control three-quarters of all the personal wealth in the country; buy 30% of all food consumed in the home; have more than $7 billion in RRSPs; are 97% debt-free, and dine out frequently.

The over-50s, or ‘grey market’, also account for 55% of the discretionary spending power in Canada – money to spend on non-essentials. Nearly two-thirds of Canadians over retirement age have clear title to their homes (with 60% of those planning to stay there) and have already borne the cost of educating their children.

Yet only 5% of all media spending is aimed at the over-50s.

Historically they have been, at best, overlooked and, at worst, ignored by the Canadian advertising and marketing community which has perceived them as being somehow outside the consumer mainstream.

But the over-50s, who were young adults during the Depression, the Second World War and the lean years immediately after, are cautious, conscientious savers who now have money to burn.

Not only are marketers ignoring the present group of greys; they also appear short-sighted, unaware that 15 years from now, children of the over-50s – baby boomers born between 1946-65, will enter the grey market constituting one-third of the population.

Ralph Hicks, management consultant with Venture Brands and an expert on the grey market, says smart marketers will realize they have a 10-year window of opportunity before boomers begin to infiltrate the segment, carrying with them their own values to create a grey market distinctly different.

Boomers, who seek wealth and success as the inevitable outcome of life because they spent their formative years in prosperity, have cast off their parents’ values of thrift, caution and economy.

So as the demographic mosaic evolves in Canada in the 21st century, together with declining population figures and a different age balance, a series of issues will challenge marketers in every category.

But will they be up to it?

‘I believe that the marketing community in Canada has been very slow to prepare for these changes in terms of the demographic structure,’ Hicks says.

‘More than a massive 90% of all media is targeted at the under-50 age group and almost none aimed specifically at the grey sector,’ he says.

‘Marketers apparently feel that they’ll ‘get the message anyhow’ or that this group’s not worth the effort because they’re so established in their purchasing habits. Research quite clearly shows over-50s will readily change brands if they consider there to be valid reason to do so.’

Part of the problem may be that the bulk of advertisers and marketers are relatively young. Another may be that the majority of packaged goods marketing ‘rules’ were written in the 1960s and targets are still defined in a way that made sense 20 years ago but makes less and less sense now.

Add to this the fact that markets historically have tended to conduct research among those inside, not outside, their target groups, and the result is that most companies have poor information, especially qualitative information, on over-50s.

‘Rather than building on their strengths in this age group, many marketers have been trying to build new strengths,’ says Hicks. ‘It’s time to re-examine conventional wisdom and rewrite the rules of marketing to maximize sales from this important group.’

Straiton, a grey at 67, has published significant research findings on over-50s and he shares the view that huge marketing opportunities are being missed across the board.

‘Canadians of my generation have been great savers,’ he says. ‘It used to be that Canada was right up there with Japan in terms of per capita savings. Older Canadians still have significantly above-average savings, on a global basis, and yet our national savings rate has dropped dramatically.

‘This indicates, by default, that the boomer generation simply doesn’t have money in the bank to any great extent because when it comes to a decision to save money or to spend it to instantly gratify a desire, they choose to spend it. They buy another VCR or whatever.

‘Canadians used to be the largest buyers of life insurance in the world,’ Straiton says. ‘The huge phenomenon of money as a consumer topic is a very recent development. We had no Moneysworth or Wall Street Week [television programs] or financial newsletters. The Financial Post was for the very rich and the Globe and Mail was more of a general interest newspaper.

‘The new awareness of money is very much a boomer generation obsession,’ he says. ‘And because boomers feel the need to consume conspicuously and to have things now, right away, the fact is that when they become seniors themselves, it’s very unlikely they’ll have the reserves to call upon that my generation has.

‘We’ve acquired wealth simply by being shrewd and singularly non-consumptive in the area of non-essentials during our working lives.’

Lester Thurow, the economist and author and newly appointed head of the Massachusetts Institute of Technology (MIT), partly attributes Japan’s phenomenal economic growth to its per capital savings rate of almost 16% of personal income in 1988. That compares with a personal savings rate in the U.S. for the same period of only 5.1%.

of money is a

Thurow believes that savings accounts make up the case value of a country in terms of its ability fo finance growth. In a recent article in The Atlantic magazine, Thurow claims the U.S.’s economic decline can be linked to its spend-not-save social mindset.

He believes the North American service industry, in which most jobs have been created in the last decade, has become saturated with companies vying for share within it.

‘Says Straiton: ‘When you see the huge turnover of the fast food and other service-industry accounts from agency to agency every six months, you instinctively know there’s trouble.

‘The implication for the next generation of seniors, while not explicit, indicates that perhaps a return to other industry bases will be required to sustain the economic activity necessary to provide the boomers with government pensions, for example, and many boomers will likely find it much more difficult to maintain their economic standards in retirement than do their parents.’

While most marketers are merely disengaged from this group, others are shooting themselves in the feet.

General Motors in the U.S. is running an Oldsmobile TV campaign under the line ‘This car ain’t for your grandfather’ despite the fact over-50s account for more than one-third of all new car sales but are the only segment of society that prefers U.S. cars above all others.

‘There isn’t a thing on TV in prime-time today that older people feel comfortable with,’ he says. ‘It’s all quick-cut rock videos that to them say nothing.’

‘Research among today’s greys indicates that, with the facts, with the demonstration of real quality, with guarantees and with the right information, seniors are as likely to purchase as anyone else, and have more cash than anyone else into the bargain.

‘But computer-generated graphics and weird-looking layouts are never going to get them interested.’ 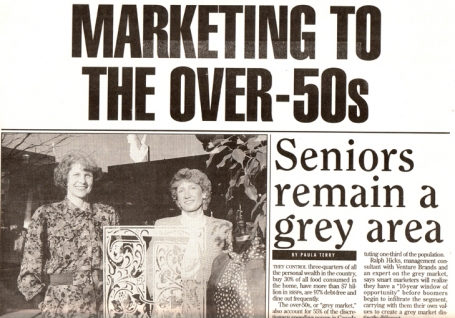