INTEGRATED marketing – using a panoply of media to communicate a unified marketing message – is making waves in the advertising community.

‘With the advent of cable, television was no longer an affordable way for many marketers to reach their audience,’ explains Peter Zary, former president of Ted Bates Advertising Inc., and now director of the executive development program at York University.‘This led clients to look for alternative ways to communicate their messages.’

This means using each element of the marketing mix to support the others, and buying space in many different media, rather than sticking to, say, print or radio.

In all this diversity, there are two constants:

Ev Elting, president and chief executive of Grey Advertising Ltd. says his network is distinctive for the centralized reporting of its operations.‘The fact that each division of Grey Canada reports to me, rather than to New York, means they’re all working together, and that’s where we become truly integrated. There’s no competitive alignment of the various operations.’

Because the agency has what Elting calls ‘no vested interests,’ a company’s ad budget can be placed across the entire spectrum of media, from television to in-store promotions.

Ted Matthews, president of Promanad Communications Inc., Toronto – a full-service agency which has grown from $10 million in billings in 1983 to more than $25 million last year – takes a different view.

Matthews says true integration occurs when one agency team is responsible for all the client’s activities.

‘The structure of most full-service agencies means that a client choosing a multi-media route has different account and creative teams for each different discipline,’ he says.

And, of course, no two creative teams have ever agreed on the same solution.

At Promanad, there is one account team and one creative team for each client.The key, says Matthews, is reaching consumers at different times and in different places to get sufficient reach and frequency.

‘That’s why a multi-disciplined approach to communications has become essential for all but the largest advertisers.

‘For the smaller marketer, who’s only spending perhaps 30% of his communications budget on traditional media – broadcast and print – we can do it plus every aspect of his ‘below-the-line’ work, including sales merchandising, point-of-sale material and sales promotion,’ Matthews says.

A relative newcomer to the total agency concept is the three-year-old Marbury Advertising Communications Inc., Toronto, whose billings grew to $15 million last year.

‘We believe that if we’re to properly steward our clients’ needs, we must have a full range of products and a variety of options,’ says Marbury President Jerry Kane. ‘The object is not to sell any one area, but to find the proper collective solution to fit the problem.’

Clients who use integrated marketing say it has improved their communications efforts.

Bob Outram, director of marketing communications at Peterborough, Ont.-based Outward Marine Corp. – who put their entire 1989 marketing budget of $1 million through Promanad – says the technique ‘provides us with a much more comprehensive program.’

It also makes working with the agency easier. ‘It speeds up the entire communications process between us,’ Outram says, ‘because there’s no need for lengthy discussions in every area’.

‘We can make sure our corporate, long-term objectives are always reflected in our local, tactical efforts.’ 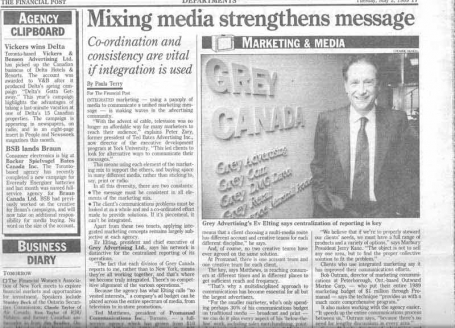