Guide Dogs For The Blind — The Barrie Advance

The charitable organization Canadian Guide Dogs for the Blind were once again chosen as the recipient of all the funds raised at Sunday’s annual Paws for a Cause Open House at Pet Country Estate, the 10-acre dog breeding and boarding kennels establishment on the 20th line of Innisfil just outside Barrie.

The event, attended by hundreds of dog-owners and their families, visitors and guests, included various dog training demonstrations, the annual Golden Retriever and Shetland Sheepdog parade, local artisan and vendor displays and all kinds of entertainment. The police dog training exhibit was of special interest to the many children present.

The day’s highlight came when guide dog owner, Frances Tanner, spoke of how her guide dog, Maisey, who was trained on the proceeds of this same event from previous years, had entirely changed her life and helped make her mobile, able to work, independent and self-sufficient. Other local ‘celebrities’ at the event included Letitia Heights’ resident Jim Ronald, who was a Guest of Honour with his guide dog, Xerxes.

Jim Ronald explained that children should really not approach a guide dog when it’s wearing its harness, as that’s a sign the dog is working, or ‘on duty’ for its owner. “If a dog’s in its harness, that’s a sign it needs to give its owner its full attention,” he explained.

“It takes fully two years and thirty five thousand dollars to train a guide dog to be ready for its owner,” said Steven Doucette, Special Events Manager with Canadian Guide Dogs for the Blind.

Pet Country Estate’s owner, Liz Gordon, confirmed that all the funds raised from Sunday’s event will once again be used to assist visually handicapped people in the Barrie and Simcoe County areas.

“It appears that we definitely will have enough funds to sponsor at least one more dog to be placed with a visually-handicapped person in the Barrie or Simcoe County area as a direct result of the money we raised last Sunday,” says Gordon. “This will be the fifth Guide Dog that Pet Country Estate has been able to sponsor in four years.”

Canadian Guide Dogs for the Blind (CGDB) is a national, non-profit, registered charitable organization that was founded in 1984. Its mission is to assist visually-impaired Canadians with their mobility by providing them with and training them in the use of professionally-trained Guide Dogs.

The Management and Board members of CGDB are volunteers from across Canada The organization is funded exclusively by donations received from individuals, corporations, service clubs, Foundations and fundraising events.For more information, contact CGDB at (613) 692-7777

To assist with next year’s Guide Dog fundraiser, contact Liz Gordon at 431-1010. 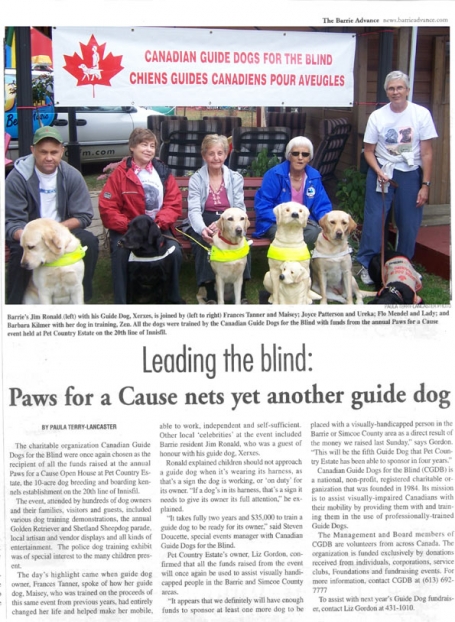