Baby products giant Johnson and Johnson has managed to carve a proprietary niche in the $38-million liquid laundry detergent market in Canada with its new Baby Laundry Liquid.

The idea for the product, still in its test-market stage – a liquid detergent designed to draw consumers away from mild powdered soaps which do not perform as well as detergent – came in 1987.

J&J approached Toronto-based Product Initiatives, a company specializing in the development of new products and services.

J&J wanted to extend the company name – already imbued with strong credentials and consumer equity – beyond its current lineup of products and successfully link it to a new but not necessarily directly-related product.

PI, which had worked with J&J on the development of its Gentle Conditioner, undertook exploratory research to discover the sort of product to which the Johnson’s franchise could be successfully extended.

Consumer Innovation Groups (CIGS) – a technique PI pioneered in North America in which, unlike traditional focus groups, participants are screened in terms of demographics and category usage as well as their ability to think creatively – uncovered several important consumer perceptions regarding Johnson’s key equities.

It became evident that, in the eyes of the consumer, the J&J corporate name was synonymous with sincerity, safety, dependability and trustworthiness, with a family orientation; and several product categories were suggested for the J&J name.

Following the CIGs, Action-Building Workshops were conducted – another proprietary hallmark owned by PI – to build upon ideas generated, in order to come up with actionable product development.

It became clear that out of 26 product ideas, baby laundry liquid was a winner on every single dimension.

While the client company developed the new product’s formulation, PI was asked to explore the packaging. Further research showed that a potential customer’s propensity to purchase the product depended to a dramatic extent on its external appearance.

‘Only when we put it into a pack that closely resembled Johnson’s Baby Talcum Powder did the target’s propensity to purchase soar’, Denton says.

‘When our consumers conceived the baby laundry liquid idea, they had visualized it, perhaps unconsciously, as having what we call a strong chord of familiarity with Johnson’s baby products line-up,’ he says.

‘What we found – and this demonstrates the critical importance of packaging in new product development – was that we “broke the chord” when we put the product in a regular bottle. The visual synergy was destroyed.’

Denton feels the product is a classic “fit” for the J&J portfolio and cites two fundamental reasons for the product’s likely long term success.

‘Firstly, the product is an effective one, and this is of course an essential but often overlooked cost-of-entry requirement in any market,’ he says.

‘But secondly, and most importantly, the product is perceived as simply the best product you could use for a baby’s clothes, because every mother associates Johnson and Johnson with trusted, safe, effective baby products.

‘The combination of the powerful chord of familiarity, coupled with a very real point of difference, make it an enormous potential winner in its category.’

J&J Baby Laundry Liquid, test-marketed in the four western provinces in 1987, will continue in test markets there this year.

Says J&J product manager Michael Freeman: ‘We are certainly very encouraged with the results so far.’ 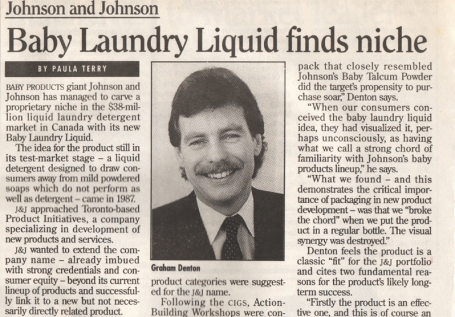