Although sterling silver has been a strong seller for much of the past decade, rarely has it enjoyed as much popularity as it does right now. Suddenly, women of all ages, especially the young, are sporting silver jewellery, often in the form of over-sized earrings, brooches and bangles.

The reason? Lots of ‘look’ in a precious metal for an affordable price.

Traditionally, the classic sterling jewellery items – lockets, chains, rings – have always moved steadily, but recently a whole new category of fashion styles has come into its own.

‘And,’ says Myer Feiler, president of Carmen Jewellery, ‘when the consumer can buy a pair of earrings in precious metal for as little at $10, it’s easy to understand why she’d choose sterling.’

‘It’s very much the metal

of choice for many customers,

It’s a medium to be enjoyed

on its own merits.’

Somemanufacturers, like Pat Cadman, vice president of Cadman Manufacturing Co. Ltd. of Courtland, Ont., believe that the latest wave of strength in Canadian sterling sales began in Quebec. For Cadman’s, clip-on bracelets and sterling rings have been top-selling items.

Another big seller, but one Cadman does not currently manufacture, is high-fashion sterling chains. ‘You couldn’t find them for years,’ says Cadman. ‘Suddenly, everybody wants one. It’s like the charm bracelets that we all used to war that died in the ’70s. Now there’s a distinct revival of them, both in karat gold and in sterling.’

In Montreal, Steve Sailofsky of Chateau D’Argent says silver jewellery is very popular with working women between 18 and 34, who ‘don’t have four weeks’ pay for a necklace, but don’t want junk at $4.99 either’.

His most recent lines incorporate 14 k gold with sterling, and enjoyed excellent sales over the holiday season. Price points for the retailer were great, says Sailofsky.

‘Silver never went out of style completely, but at one point there was so much of it around that tastes were diluted. A lot of companies stopped doing it then, but those of us who chose to concentrate on the sterling jewellery market have thrived.’

Today’s sterling wearers are not afraid to mix and match their silver with gold or goldtone jewellery. Indeed, many items combine both metals, such as top-end steel and gold watches, or tricolour Russian wedding bands.

But for most customers, sterling is not purchased simply as a poor woman’s alternative to gold. Insists Susan Burns, vice president of marketing for People’s Jewellers: ‘It’s very much the metal of choice for many customers, particularly younger people. It’s a medium to be enjoyed on its own merits.’

Here in Canada, there have been no deliberate or sustained promotional attempts to encourage consumer takeoff of sterling at the retail level.

In the States, however, Silver Trust International, the marketing arm of the silver mining industry, has conducted a sizeable and successful advertising campaign in upscale women’s magazines, positioning silver as the ideal medium for sophisticated, fashion-conscious women aged 25 to 54.

Three different advertisements, each in a black and white, double page-spread format, juxtapose a model with still-life jewellery shots. Each advertisement is signed off by an individual jewellery designer with accompanying retail listings.

The co-operative program, which ran until December of last year, was aimed at stimulating sales of sterling nationwide by ‘branding’ silver with the participating manufactures’ names.

The campaign spilled into Canada via such prestige books as Elle, Harper’s Bazaar, Vogue and Vanity Fair. So far, the strategy seems to have been successful. In the U.S., dollar sales of sterling increased 100 per cent between 1986 and 1988.

Katherine Wolf, director of Silver Trust International, predicts that sales will continue to be strong well into the next decade. ‘While no one can sustain annual 60 per cent growth rates,’ she says, ‘silver will continue its enormous popularity right throughout the decade.’

Silver’s appeal is not just limited to savvy, sophisticated adults, however. According to a recent survey by the Silver Information Center in New York, U.S. teenagers are not only buying more jewellery but are trading up on quality, too. In sterling, girls aged 13 to 18 buy more frequently than do adults.

‘Even more interesting’, says Katherine Wolfe, ‘is the fact that teens are prepared to pay prices comparable to those adults will pay for solid sterling jewellery.’

And with the ‘60s revival in fashion both in Canada and the U.S., along with the smouldering looks of animal prints and the raunchy Wild West statements among the teen set, naturally complementary accessories arethe ever-popular peace symbols, happy faces, icons, wheel-sized hoop earrings and huge pendants dangling from leather cords.

Real sterling pins are also popular with all ages, but teens tend to wear three of four of them clustered together, or one bold piece that makes a definite and dramatic statement.

Sterling charms of all sizes are more important than ever, hanging from bracelets, necklaces and earrings. And animals, fish, hearts, crescent moons and star motifs, all in silver, are also ‘must-haves’ with the under-20’s crowd. This is a precious metal you can have fun with.

Another boost to silver’s popularity was the huge upheaval in gold prices in the ‘80s.

‘The ethnic look, particularly the demand for hand-crafted silver items, is now booming,’ says Carla Hiscock of R. H. Trapnell Ltd., an independent retailer in St. John’s, Newfoundland. ‘People go to Mexico and think they’re getting the best-ever deals in sterling silver, but the fact is that it’s really no more expensive here in Canada.

‘Manufacturers seem currently to be gearing their output to two types of women: the traditionalist, who wants tried-and-true jewellery items; and the less-conventional, younger woman who wants silver jewellery that is bang up-to-date at a price she can afford.’

In terms of trade promotion, Charlie Gillman, a vice president of Gillcraft Jewellery Ltd., Canada’s largest precious metal jewellery manufacturer, claims his company is the only sterling silver producer in Canada using the Gizmo reordering system, which, he claims, makes his retailers’ lives a lot simpler.

Gillman believes he is also the first manufacturer to launch a countertop merchandising unit, which includes chains, charms and earrings, and which he uses to sell stock through to both national accounts andindependent jewellers.

He also plans to expand his sterling line, based on retailer response, early next year.

‘Spring and summer are

maybe because it looks

According to Anne Duff, senior buyer for Henry Birks and Sons Ltd. in Montreal, customers are returning to quality jewellery, and very often silver’s affordability enables them to do so.

Birks made a ‘conscious decision’ to go after the silver jewellery market two years ago, in recognition of its increasing potential in Canada. ‘In the right designs, it’s being very well received by Birks’ customers,’ says Duff.

‘We’ve had steady strong sales for several years now. But it’s not the coy little brooch that people are asking for any more. Today, our customers want items which are big and beautiful.’

‘We’ve sold sterling earrings the size of dinner plates,’ he says. ‘Sterling is a metal for everyone, segmented only by its design. Many people think it makes no sense to buy costume jewellery when for almost the same price they can have “the real thing”.

‘It looks great and has a high intrinsic value. As well as our wide range of more traditional pieces, we have a complete line of sterling jewellery which is very modern and which we update frequently.

‘The same woman will often wear either a classical or an ultra-modern piece, depending on her mood, her dress and her accessories.’

Karen Samuel, president of KSP Jewellery Inc., a retailer with four outlets in the Toronto region, confirms that age is no barrier to wearing big, bold designs.

Her huge sterling earrings are as popular among the over-40 group as they are among teens. ‘There’s something very fine-looking about silver,’ says Samuel. ‘For years, gold, whether real or goldtone, was the colour of preference. Now, silver has a very definite foothold in the market’

‘Sterling sales are very cyclical. It did extremely well earlier in the decade and I feel another big resurgence peaking now,’ says Samuel. ‘Spring and summer are traditionally the best seasons for sterling among my clientele, maybe because it looks so sensational on a suntanned skin.

‘And no one should be afraid to mix and match it with either karat or costume gold. I love the marriage of the metals. One colour can play against the other to very interesting effect.

‘Sterling lets you make a very personalized statement, because of its look and affordability, rather than just running with the crowd.’

It seems that on either young or old, sterling silver will play a major and dramatic role in communicating personal style, individuality and bon chic as we head through the 1990s. 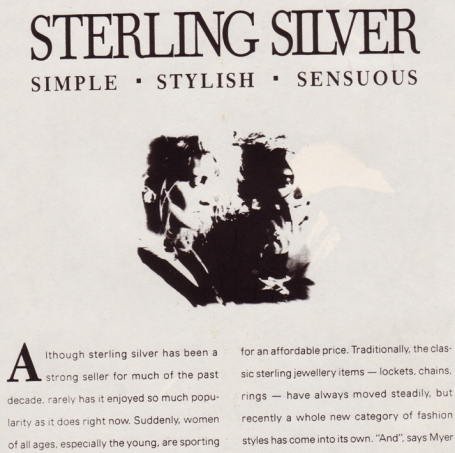