It’s pretty common in today’s North American society for people to be afraid of the idea of death and dying, despite the fact that, like taxes, it’s pretty inevitable. Sooner or later, it’s a fact that everyone will need to confront.

Perhaps many of us are afraid of a painful death over which we will have no control. That’s perhaps one of the most fearsome aspects of death – we’re afraid that it might plunge us into pain beyond our capacity to endure.

The hospice concept, well-established in Britain and Europe but much less so here in Canada, involves caring for people who face a life-threatening illness in a non-hospitalized setting, and caring for their loved ones too. It facilitates a much more ‘active death’ in the sense that clients have much greater control over how they’re treated at the end of their lives, and offers them far more emotional, spiritual, social and physical support than would be possible in a standard hospital environment.

Dr. Rick Irvin is the Chair of the Honourary Board of Directors attempting to fund a ten-bed residential hospice facility here in Barrie that would serve not only city residents but also clients from the surrounding townships.

Irvin defines the concept of a residential hospice as being an ideal end-of-life facility “for people facing a difficult diagnosis who don’t want or need hospital care but who are unable to remain in their homes”.

According to Irvin, “there’s a groundswell of positive energy surrounding the idea of people dying in a non-hospitalized environment. Governments at all levels are showing increased levels of support for the idea of hospice care, as are the major disease foundations and the community at large. The intent of hospice support is care, not cure.”

Dr. Patrick Doorly, a palliative physician here in Barrie, admits that historically doctors have not tended to do well tending to dying patients, partly as a result of their classical medical education which focuses on helping people to get better. “Most doctors feel uncomfortable,” he says, “because, despite their best efforts, their palliative patients simply aren’t going to be cured.”

However, he believes that doctors – and society at large – need to approach death more objectively and refocus on supporting families and patients instead of merely providing ongoing medical interventions.

Just as the midwifery movement introduced the idea of different choices at the beginning of life – natural births, the Lamaze movement and births at home, for example – so the hospice movement is gradually making Canadians aware that there are much more comforting and supportive options for the end of life, too.

“Hospice care will inevitably become an integrated part of healthcare in the years ahead,” predicts Doorly.

Economically, says Dr. Doorly, the hospice option also makes sense because it is so well supported by dedicated volunteers who provide the continuity that constantly-changing hospital shift-workers cannot reasonably be expected to provide, thus enabling people to die with dignity and in relative comfort. It also frees up acute beds for patients who will likely benefit from curative treatment.

Aileen Carroll, the former federal Barrie-area MP, is a great supporter of the hospice movement. Prior to being elected in 1997, Carroll volunteered several hours a week helping people to die in their own homes, and found that she received far more from the experience than she ever felt she gave.

“It’s just the most amazing joy to be a hospice volunteer and give care, compassion and comfort at the most intimate time in a client’s life,” she says. Carroll says that all levels of government are beginning to understand that the hospice option has been chronically under-funded for years, and cites a wonderful Senate report that enabled politicians to learn a lot about the hospice movement, based largely on the great success of the British model.

Once people become acquainted with the concept and understand its many benefits for patients, their families, the community at large and also the healthcare system generally, she believes that people will be very quick in their response to support it.

Individuals involved in the process of dying each have a variety of physical, spiritual, emotional and social needs, and for each individual the nature of his or her death will be completely unique. The goal of a hospice team is therefore to be sensitive and responsive to the special requirements of each individual and family.

The late Canadian author and social activist, June Callwood, was a huge supporter of hospice care. “There’s a great pleasure in providing palliative care,” she once said, “and in surrendering your own ego in order to stay in tune with the person you’re trying to help.”

The goal of Hospice Simcoe is to provide quality end-of-life care for everyone. The charitable organization currently provides essential services to over 1,500 people a year, both to those who are dying and those who are grieving.

To help make the planned ten-bed residential facility a reality, where, says Jan Janssen, Hospice Simcoe’s Executive Director, the organization will ensure “that neither you nor your loved one is alone during this last and important phase of life’s journey,” please call the registered charity at 722-5995. 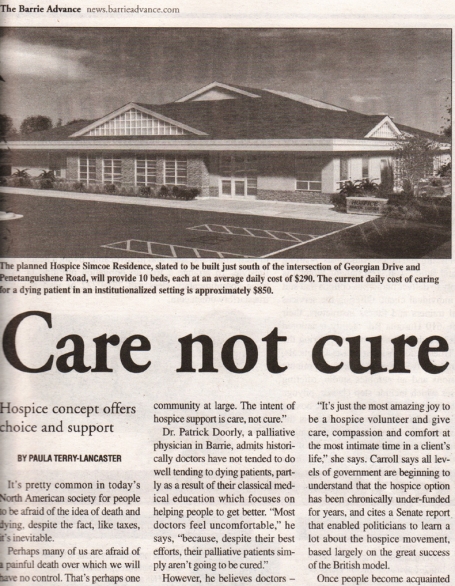