More than 3,000 visitors attended this past weekend’s 18th annual Pow Wow, hosted by the Barrie Native Friendship Centre. Tribes from across Turtle Island – the native expression for Mother Earth – were in attendance, both aboriginal and non-aboriginal, and the event included drumming, dancing, singing, chanting and a host of other native North American traditions.

“The Pow Wow is a time of coming together, celebrating community and culture, establishing new friendships and strengthening old ones,” said David Martin, executive director of the Friendship Centre. “We welcome people of all ages and all races, and we celebrate that which we have in common, which we see as being far more important than our differences.”

Martin was thrilled when he got an e-mail from Jack Layton’s office, asking if the politician would be welcome to attend the event.

“We were pleased he showed such interest in our community, and we were very excited to meet him,” said Martin. “There are a tremendous number of issues facing aboriginal people, particularly those not living on reserves, and Mr. Layton showed a good understanding of those issues.”

The Barrie Native Friendship Centre, located at 175 Bayfield St., acts as a status-blind centre for people of all races who would like to learn more about aboriginal culture.

The centre runs language and cultural programs and acts as a resource to the many aboriginal people living within the City of Barrie. 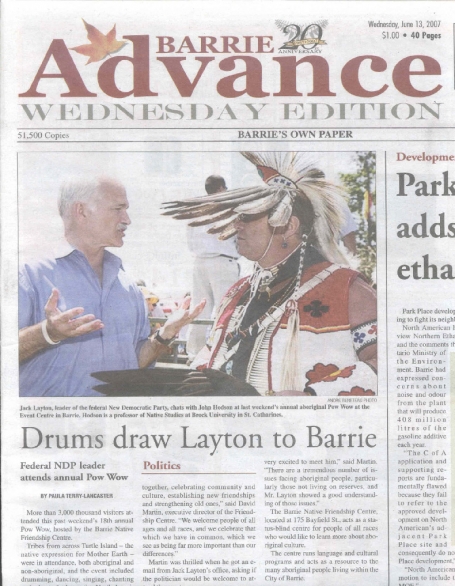