Downtown lawyer, Peter Thompson, hasn’t let the diagnosis of an incurable illness almost six years ago deter him from his creative passions. A former professional musician, and a painter and photographer of some repute, he’s found that in the time he’s had Parkinson’s Disease, his creative endeavours have sustained him through the many difficulties associated with his illness.

Born in London, Ontario, in 1950, Peter’s family has deep roots in Simcoe County and Huronia. His father was appointed a Judge in Owen Sound in 1970, and Peter’s sister, Ruth Lovell, is currently Mayor of that town, having been elected 5 years ago and acclaimed in November, 2006. Peter went to elementary school in London but attended St. Andrew’s College in Aurora during his high-school years as a boarding student.

Returning to London to attend the University of Western Ontario in 1970, Peter graduated with a Liberal Arts degree in 1976, taking two years off to perform in Europe. During his student days at Western he was a familiar face on the local folk music scene, where he sang and played a variety of acoustic guitars.

Peter first moved to Penetanguishene in 1987, a town in which his ancestors had been especially prominent and where the family had always had a cottage on Georgian Bay. Peter’s grandfather, A. B. Thompson, was both an M.P.P. and M.P., representing Simcoe Centre provincially and Simcoe East federally between 1989 and 1935. Stephen Leacock, the Orillia-born humourist, regularly introduced Peter’s grandfather prior to his making speeches in the area on his political campaigns.

Peter’s great-great-grandfather, William Thompson, was almost more prominent than his son, having defeated William Lyon McKenzie for political office in the mid-1800s. Peter’s great-grandfather, A. A. Thompson, was the first Mayor of Penetanguishene, and is depicted in a mural, painted thirty years ago, which still appears at the corner of Water and Main Streets in the town. A. A. Thompson was also a prominent fur trader and was made an honourary Chief by the Iroquois tribe who regularly came down from Lake Nipissing to Penetanguishene to trade with him.

Peter’s uncle, A.B. “Aff” Thompson II, was the very first Canadian Prisoner of War in World War II. Aff later earned fame as one of the few survivors of the notorious “Great Escape” from the Stalag Luft III in Germany in 1943, and practised law both privately and as a Crown Attorney in Simcoe County until his death in 1985.

Peter’s own father, the Honourable Justice D.G. E. Thompson, Q.C., affectionately known as Alphabet Thompson, was appointed to the bench in Grey County in 1970 and remained a prominent judge both there and in Simcoe County until his retirement in 1990.

When Peter saw the Beatles in Toronto in 1966, it was an event that he claims changed his life in terms of wanting to be a musician. Despite the family tradition of a career in law beckoning, he’s managed to make a career for thirty years in both disciplines. After leaving Western he was a full-time musician on the road, travelling in both North America and Europe and returning in 1981 to begin a degree in Criminology at Simon Fraser University in B.C.

After only a year of the three-year degree program he was accepted by the University of Alberta to attend Law School, from which he graduated in 1985. After articling in his home town of London, Ontario, he became a qualified lawyer in 1987 and joined two law firms in Midland where he worked till 1991, when he took a sabbatical year in Sweden just after the birth of his first daughter, Mimmi, now 18 at a student at Western herself (he has two more children – Lina, 15, a student at Bear Creek, and Erik, 13, a student at Georgian Oaks Academy). He returned to work at the firm of Graham, Wilson, Green here in Barrie and set up his own practice in 1997 on Owen Street where he remains to this day, specializing in personal injury law.

Peter was diagnosed with early-onset Parkinson’s Disease in 2002, a condition with no known cause for which there is no known cure. The diagnosis was an event that co-incidentally put him in the national news for a time. His doctor at the Toronto Western Hospital had been running late for Peter’s scheduled appointment, at which his definitive diagnosis of PD was made. In consequence, Peter was ten minutes late returning to his vehicle which was parked in the hospital car park under the management of the conglomerate, Impark. He was given a thirty-five dollar ticket, which a week later increased to seventy dollars.

Peter considered this unfair, and sent a letter telling the company that the reason for his being late was that he had just been diagnosed with an incurable disease. He enclosed a cheque for fifteen dollars, having already paid $7.50 originally on a daily maximum rate of $10.00. Impark sent it back and put the fee into collection, and Peter received at least 500 harassing calls for a period of over a year. Reading one day about illegal parking tickets in The Toronto Star, he contacted a reporter there telling her about his own personal experience.

Peter’s parking ticket story made it all the way to Premier McGuinty’s office and the office of the Privacy Commission. He was on the front page of The Star for two days running, and also interviewed on television by the CBC. Peter threw down the gauntlet, saying he’d donate seventy dollars to the Parkinson’s Society of Canada, if both Impark and Canadian Bonded Credit Ltd., the collection agency, would each donate a thousand dollars to it. They did, and Peter sent both organizations tee-shirts from his Super Walk for PD, together with plaques in recognition of their generosity. Two local lawyers each also donated a thousand dollars as a result of watching Peter’s television interview, and numerous phone calls were received by the media from people with similar stories to tell.

In terms of coping with the real physical disabilities that Parkinson’s patients suffer, Peter has been very buoyed by the books of British physician, author and media-guru, Dr. Oliver Sacks, currently Professor of Neurology at Columbia University. In his latest book, Musicophilia, Sacks talks about the very real, clinically-proven benefits of creative enterprise to people living with PD, and states that there is real medical evidence that creativity slows the progress of the disease and mitigates the symptoms.

“Probably one of the worst spin-offs of PD is the effect it has on one’s self-confidence,” says Peter. “That becomes a vicious circle as one avoids risks of failure. Not knowing how one’s body will react from hour to hour is not exactly inspirational. When I’m hiking or fishing, my symptoms often disappear. When I spend a few hours playing my music, painting or taking pictures, I can forget about my illness for a while. I like to stay active and optimistic most of the time.”

Peter’s creativity doesn’t just extend to his music – he released a second CD a year ago entitled Taking A Dive (Heart First) on which he’s accompanied by several internationally-known folk musicians – but he also has a passion for painting and photography. Peter was the only Canadian to have his work accepted by the New York-based Parkinson’s Disease Foundation for both their annual international brochure and their 2008 calendar, both of which feature the photographs and paintings of people with PD from around the world.

Since then, two more of his photographs have been accepted by the Foundation for sale at an auction at the organization’s annual Gala at the Prince Hotel in New York City on May 14th. All the proceeds will go to the PDF, the largest international PD research organization, whose mission is to fund research into the causes of, and potential cure for, this very debilitating disease which affects over 100,000 Canadians and over 200 people living in the City of Barrie alone.

Selected paintings and photography by Peter Thompson and Barrie residents living with PD can be viewed at the Hope on Display event, organized by the local chapter of the Parkinson’s Society of Canada on Tuesday, April 1st from 1pm – 4pm in the Rotunda at City Hall.

More information on Parkinson’s Disease is available at www.pdf.org, www.pdcreativity.org, [email protected] or at 1 800-565-3000. Samples of Peter Thompson’s work can be seen at www.peterthompson.ca. 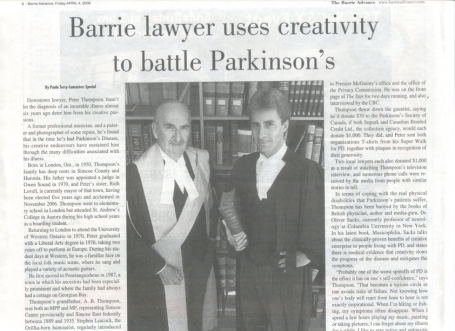