The audience of almost 150 people listened attentively as the former middle-weight champion prize fighter told his story of wrongful conviction for a crime of which he was innocent, and the horrors of spending over 20 years incarcerated in a New Jersey jail, ten of them in solitary confinement and six of those in an underground cell.

Carter’s story is indeed harrowing – but his message was one of humour, hope and liberation, and the ability of the human spirit to triumph over even the most desperate adversity – what he referred to as ‘the triumph of substance over form’.

Dr. Carter, who now lives in Toronto, and has two Honourary Doctorates in Law, one of which is from York University, began by telling his audience how thrilled he was to be in Barrie and helping to support an organization like the Busby Centre ‘whose mandate is to help people who need help’.

In fact, said Dr. Carter, now aged 71, he was pleased to ‘be anywhere’, given that he had narrowly escaped ‘state-sponsored execution’ – he had been committed to death row – and that it had been only the quality of legal representation that he received that had made a critical difference and enabled him to escape capital punishment.

In 1985, New Jersey State Judge Haddon Lee Sarokin overturned Carter’s conviction for a triple murder which took place in Carter’s hometown of Paterson, N.J. in June of 1966, concluding that that the prosecution’s case ‘had been based on racism rather than reason, and on concealment rather than disclosure.’

Carter spoke of the ‘institutionalized hatred’ that typified the racial discrimination blacks suffered throughout the US until the late 1960s, which resulted in a huge lack of equality in housing, education, jobs, justice and basic human respect. At his trial, the investigator, the police, the judge, the family and friends of the victims, the state witnesses, the court clerks, the guards and the jury were all white. ‘I, at that time,’ said Carter, ‘was black.’

His message to the crowd was that there is a successful approach to life that is applicable to all people, ‘not just prize fighters or athletes, but everyone, whether you shine shoes or ride a spaceship’. Carter’s prescription for life comes in four parts: Dare to dream; visualize your dream; seize every opportunity, and go the distance.

Dr. Carter said that this was the strategy that he’d learnt as a boxer in his early adult life and had moved him from self-hatred as a young person to self-love. It had also sustained him throughout his prison experience.

‘When I was convicted of murder, I suddenly found that instead of fighting for a championship medal, I was now fighting for my life.’

Carter talked with great humour about what it was like being portrayed by Denzel Washington in the 1999 film The Hurricane, directed by Canadian Norman Jewison. ‘Until I saw Denzel portray me on the screen, I had no idea how good looking I was,’ said Carter. He was also the subject of Bob Dylan’s famous 1975 song entitled Hurricane.

Carter considers personal powerlessness to be the ‘most prevalent social emotion’ of our times. He talked about how society today is largely fear-based. ‘People are afraid of immigrants, drugs, crime, toxic water, their inability to pay the rent, or the fact their children’s lives will not be more successful than their own.’

‘Fear is everywhere,’ he said.

He said that there’s nothing too small one person can do for another that won’t make a difference. He talked about a mentor called Ali Hussein whom he met while he was parachuting out of planes over Germany in the U.S. army in 1966 ‘who became my David Busby Street Centre, my counsellor and my helper.’

Hussein believed in him, helped him overcome his hereditary speech impediment, channel his anger positively, believe in himself and overcome his self-imposed limitations. When he developed the ability to think positively about himself he quite literally ‘found his voice,’ and a whole new world opened up to him.

Carter attributes his qualifying for the 1956 Olympic Games directly to the influence of Ali Hussein on his life, 54 years ago.

Carter’s message was one of optimism, of the need to never give up and to ‘keep struggling no matter what obstacles you face, because life is an obstacle course but you’ve got to run it’. His final words were: ‘Hate put me in prison, but love busted me out’.

Carter insisted that the work of the David Busby Street Centre is critical because it involves people helping people who need help – just as he himself needed the help of Ali Husssein as a young man. As Don McNeil, DBSC Chair reminded the audience: ‘When the Centre first opened in 1993, we saw one person every day. Now we see one person every two minutes.’

On average, 180 people a day come to the DBSC, which is desperately seeking a new home after 14 years of being located in the basement of Trinity Anglican Church on Collier Street. The current space has become completely inadequate in terms of providing services to the huge numbers of clients who need use it The Centre sees a total of 38,000 clients a year, the same as was the population of Barrie just 25 years ago.

The youngest member of the audience at the $100-a-ticket Gala was Joel Fortin, 14, who is in Grade 9 at Nouvelle Alliance Secondary School and who lives in Barrie’s east end. ‘I saw the movie and thought the character of Hurricane Carter was really interesting,’ said Joel. ‘I’m really glad to be here tonight because the money we raise will go to helping people who really need help.’

Said Jeremy Vos, who’s a full-time counsellor and outreach worker at the DBSC: ‘I learn so much from the clients I serve, because they’ve all suffered so much. I respect them because they’re survivors. I always gain new insights from them – many of them are some of the most interesting people I’ve ever met. In the 24 months I’ve worked at the DBSC I’ve received only respect from the participants. Our clients are extremely loyal to the staff members, and it’s truly a pleasure to support people who need such support.’

The problem of poverty

Kyla Shay, aged 24, trained in community work at George Brown College and did her placement at DBSC, where she’s now employed as an administrative assistant. ‘I had no idea how big the problem of poverty was in my hometown till I joined the staff of the Busby Centre,’ said Shay. ‘I just love my job, helping people.’

Kim Beany, owner of Mr. Rooter Plumbing and a partial sponsor of the Gala event, said that, in his view, society should be judged solely on the way in which it treats its most vulnerable members. ‘It’s a feature of being human, that we should feel elation when we’re giving as opposed to taking,’ he said.

Part of the problem social agencies like the DBSC face is the abject lack of affordable housing for society’s most marginalized citizens. Chair Don McNeil confirmed that in Peel Region, the waiting list for housing is 21 years, while in Simcoe County alone there are 3,200 people on the waiting list, many of them families with children.

‘The people we see at the DBSC, for the most part, are not imports,’ said McNeil. ‘People sometimes think our centre is a magnet, attracting the homeless from other parts of the Province. It isn’t. Most of the people we see are from right here in Barrie, from our midst.’

McNeil’s view is that neither the County of Simcoe nor the City of Barrie is doing nearly enough in terms of developing affordable or mixed-use housing. ‘It costs far less to taxpayers to support our clients by providing affordable housing than it does to run shelters and organizations like ours,’ he said.

No one from City Council attended the Gala event, which local Family Lawyer, Rose Adams, a supporter of the Centre, said was ‘extremely disappointing,’ though both our federal and provincial representatives and all the candidates for the next federal election were present.

Said Green Party candidate, Erich Jacoby-Hawkins, a regular volunteer with the Out of the Cold program: ‘We need comprehensive housing support, from shelters to transitional housing through to affordable home ownership. It costs taxpayers far less to provide housing than to deal with poverty and its effects.’

Federal NDP candidate, Myrna Clark, believes that the provision of childcare can make a critical difference to parents in poverty: ‘It makes so much more sense to support these people at the “front door” when they’re struggling, than at the “back door” of the prison system, which is where many of these people will end up if we don’t support them now.’

Downtown resident, Laurie O’Toole, who donated many of her possessions to the DBSC when she herself became homeless, and who is now a regular volunteer at the Centre, confirmed that what people need most is ‘encouragement, honesty, kindness, generosity, acceptance and understanding. I know what it’s like to feel abandoned by society. I get a lot of satisfaction from helping others who feel the same way I did, and from giving them the sort of direction I never had.’

Louise Stinson, Executive Director of the DBSC, announced that an anonymous donation of $15,000 had just been received for the Centre’s Capital Campaign. To donate funds to help the Centre find new and adequate premises; to support the ongoing work of the Centre, to get involved or to volunteer, phone Louise at 739-6916 or visit www.busbycentre.ca 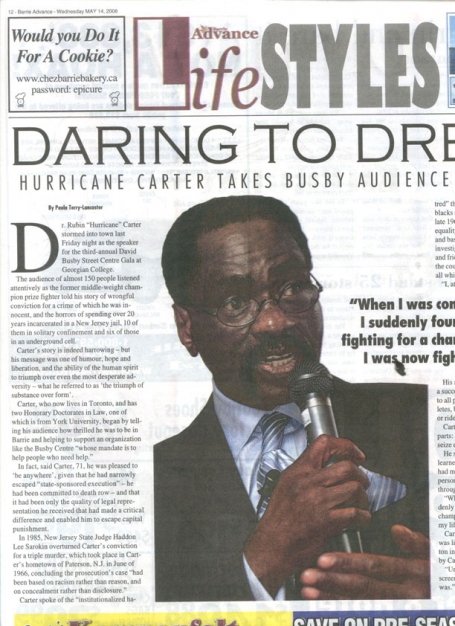