Selling cars by contemplating the beauty of the ocean’s ebbing tide seems an intriguing paradox.

But Nissan Motor’s new TV and print advertising campaign in the U.S. for its new Infiniti line of luxury cars (due to appear in U. S. showrooms this month and in Canada next fall), has been dubbed the ‘Zen’ campaign by industry cynics because you do not see the car.

What you do see – geese flying in formation, boulders on a hillside, a tree standing in the mist – is intended to differentiate the Infiniti line and tries to redefine consumers’ concepts of luxury and quality by using advertising that is Japanese in style and content.

Is Canada ready for this novel approach to the automotive market?

At a time when observers have been pointing to sagging sales of European luxury cars on this side of the Atlantic since 1986, is Nissan taking a high-risk gamble to eat up lost sales? Or is it implementing a sensible and innovative campaign for ‘instant image’ for a line of cars competing with well-established European models?

‘The campaign does an excellent job of creating an image and immediately gives you a good feeling for what’s behind the company, rather than just the hardware – the car and the engine,’ Forsyth says.

Adding that Canadian Infiniti plans are ‘not finalized yet’, Forsyth says he expects the Zen campaign, through Hill, Holliday, Connors, Cosmopulos, will run here too.

‘If sales in the U.S. between now and then respond well, it will probably run, but we at Nissan Canada research all our advertising very thoroughly before it runs, and so even if it’s phenomenally successful in the U.S., it’ll still be researched here first before a final decision is made.’

Andrew King, senior consultant for DesRosiers Automotive Research, refutes the idea that consumers are turning away from the luxury segment, citing the economy and normal cyclical industry patterns as reasons for the slight downturn in 1989 and predicted downturn in 1990.

‘It’s got nothing to do with consumer demand,’ King says.

‘The luxury-car segment has had so many good years in the 1980s that much of the pent-up demand has disappeared,’ he says. ‘And European players have been hit hard by currency fluctuations in the last couple of years that have made their cars more expensive than ever in North America.’

Although King sees the Nissan Infiniti and Toyota’s new Lexus line (also to be launched in Canada in the fall of next year) as offering an extremely high-quality product at lower prices than their European counterparts (both will be priced in the $40,000 to $60,000 range), he warns against underestimating the ‘status symbol’ power of the European imports.

‘The Japanese need to build from scratch an image that the European luxury automakers have had for years,’ he adds. ‘It is possible to do. BMWs, for example, have only been available in Canada since the 1960s and they have built up a huge prestige image in a relatively short time. That’s why the Zen campaign is so interesting.’

‘The issue behind it is that vehicle manufacturers are now having to really market their vehicles. Before, European marketers thought cars would sell themselves on their image alone. While the Infiniti approach may not be for everyone, it is an example of the kind of innovative new marketing techniques which can be seen more and more as the luxury market becomes more competitive. And it has implications for the whole industry.’

‘As well, although the high-end segment in Canada will always be smaller than in the U.S., on a weighted basis it is one of the big predicted growth areas of the 1990s.’

‘Well, there’ll obviously be some of that,’ King says. ‘But the people who’ve bought Acuras in the last three years are largely people who bought Hondas in the 1970s and early ‘80s, and who’ve now moved upscale. There’s considerable loyalty among the buyers of Japanese cars. So I predict a lot of trading up amongst happy Toyota and Nissan owners for the Lexus and the Infiniti – people who are already both familiar and comfortable with the corporate image of those companies.’

‘People who’re currently driving our Maxima, for example, already know what our cars are like. The Infiniti price point will match the 3-Series BMW, the Saab 9000, some upper level Audis and Volvos. So although the Infiniti is very much a luxury car, it’s also for anyone who’s very value-conscious. It’s not at a ridiculous price that no-one is prepared to pay for anymore.’

As to whether ‘no-car’ advertising is a trend which is likely to be imitated, Jack Clissold, vice-president of sales and marketing for Ford Motor Co. of Canada, is adamant it is not.

‘If the Infiniti is successful – and I believe it will be – it will be despite, rather than because of, the advertising,’ Clissold says. He feels both new Japanese lines are well-positioned in terms of pricing to do well in the North American market.

‘There certainly has been a significant tail-off in the European-dominated luxury market since the Wall Street crash of October 19, 1987,’ he says.

‘If you look at the demographics of the people who used to buy those luxury vehicles, they were the young, very successful, slightly unconventional very status-symbol-conscious yuppies who liked to wear their success on their sleeve. Those people, since the crash, have for the most part not been able to replace the level of income they were earning before it.’

Additionally, as the (West German) Deutschemark has continued to grow relative to the U.S. dollar, cars have come to represent less and less value in a North American context.

So speculation about the demise of the luxury car seems to be influenced by a combination of two factors: a diminishing number of people who can afford them – an absolute, demographic factor – and the relative value of the dollar to the Deutschemark – an economic factor over which the market has no control.

As far as the Zen campaign is concerned, Clissold says Ford would never risk its corporate resources on a no-car campaign.

‘Not in my lifetime, anyway, if I have anything to do with it – and I probably will,’ he says. ‘Although they’re good cars, the Lexus and Infiniti are not a Mercedes by any definition. It took Mercedes many, many years to earn its four stripes. It’ll take at least 20 years for the Japanese to build up a similar image.’

Webb believes the Infinity will be a winner but because it’s a good, high-quality and ‘pretty’ car, not because its ad campaign is breaking new ground. He denies the Zen approach will have any significant impact on the advertising of luxury cars on this continent, adding that the no-car tack is definitely not the wave of the future.

‘We at Jaguar would never take a no-car approach because we have a product that we’re proud to show upfront and centre for its beauty and feline grace,’ he says. ‘I’m obsessed with the idea of showing our product.’

Webb says that as far as the luxury market is concerned, Canada is an affluent country and people will always want luxury cars to reward themselves for working hard.

‘The fact is that Jaguar car-buyers are not the idle rich,’ he says. ‘They’re people that work very hard and feel they deserve the reward.’

Webb says that since pricing is always pyramid-structured, there are fewer people with the kind of discretionary income to afford a Jaguar, which sells from $60,000 to $80,000. He says taxation laws have changed in Canada to the detriment of luxury car-owners.

‘It is true that the luxury car market is softening slightly. But if you look at the last four-year period in Canada, for example, and take an average from it, we’re about on average this year, down from an all-time high in 1988.’

‘So far, 1989 is the third-best year ever for Jaguar in this country. And worldwide we’re up, with European sales very strong and Japan increasing daily. One should always look at the luxury market in the context of the global picture.’

‘In terms of market reaction to the whole softening-at-the-high-end theory, companies like Toyota and Nissan wouldn’t be looking at this market if they weren’t absolutely convinced of its long-term potential,’ Buchko says.

‘Firstly, they wouldn’t be spending millions of dollars to develop cars like the Lexus and the Infiniti if they weren’t sure of making money in the long haul. And secondly, the Japanese don’t make dramatic mistakes, period. With more entrants the luxury market will indeed become more competitive. However, it’s up to the individual companies as to how they handle a tougher market.’

‘We at BMW think our cars are good enough on their own merits to stand alone,’ Buchko says. ‘But we’re going to spend a lot of time in the coming years talking about rational reasons to buy a BMW, as well as the emotional ones.’

Webb says all 1990 BMW models will focus on ‘active safety’. They will have air bags and anti-lock brakes as standard features.

The anticipated launch of the new Japanese luxury lines into Canada seems to be acting as a catalyst in the sense that image alone will not be sufficient ‘raison d’acheter’ for luxury cars in the 1990s.

Automakers will have to find additional points of difference, and rational ones at that, to compete and survive in an increasingly crowded market. 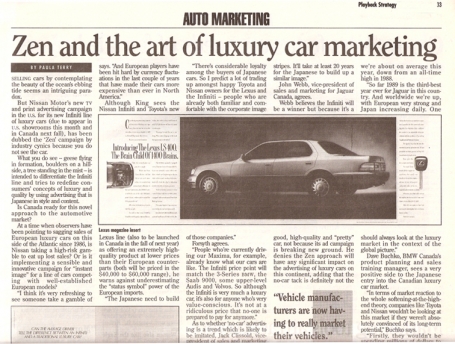